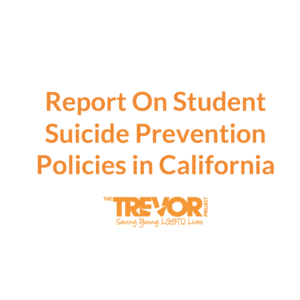 School policies are an important part of suicide prevention, especially because of the amount of time young people spend at school. Suicide is the 2nd leading cause of death among young people. Lesbian, gay, and bisexual youth are more than four times more likely to attempt suicide than their straight peers, and nearly half of all trans people have made a suicide attempt. 1/3 of all lesbian, gay, and bisexual youth are bullied at school, and almost half of them seriously consider attempting suicide, almost 4 times more likely than their straight peers.