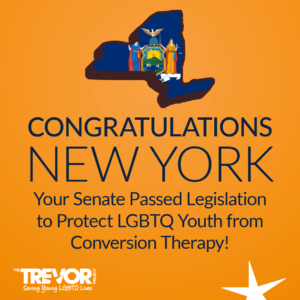 The Trevor Project celebrates two bills that passed the New York legislature today that will protect LGBTQ youth from the dangers of so-called “conversion therapy” and discrimination on the basis of gender identity and expression.

“The State of New York is sending a clear message today that LGBTQ youth are perfect as they are,” said Amit Paley, CEO & Executive Director of The Trevor Project. “No one should face discrimination or the torture of conversion therapy because of who they love or who they are.”

Today the New York State Assembly and Senate both voted to protect minors from conversion therapy at the hands of licensed mental health professionals. When the bill is signed by Governor Andrew Cuomo, who has indicated his strong support, New York will be the 15th state in the nation to protect LGBTQ youth from this dangerous and discredited practice.

“We are proud that the New York legislators have acted decisively today to protect LGBTQ youth from the harms of so-called ‘conversion therapy.’ We are grateful for Governor Cuomo’s leadership on this issue, and eagerly await his signature on this vital legislation,” said Amit Paley, CEO & Executive Director of The Trevor Project. “As much as New York is renowned for being friendly to LGBTQ people, we at The Trevor Project know that thousands of young New Yorkers have made use of our suicide prevention and crisis intervention services in the last year alone. Conversion therapy-related issues come up frequently, and the stories these youth tell us about being forced to try to change who they are or who they love would break your heart. Today’s votes will save lives.”

“By passing this bill so early in the new year and with strong bipartisan support, New York is sending a powerful message that ending conversion therapy should be a priority,” said Sam Brinton, Head of Advocacy and Government Affairs for The Trevor Project. “The Trevor Project is proud to be part of a strong coalition of people committed to ending this widely discredited and harmful practice. Thousands of local New Yorkers have contributed to the work of our ‘50 Bills 50 States’ initiative, and today they are seeing their efforts pay off.”

The New York State Assembly and Senate also both voted for Gender Expression Nondiscrimination Act (GENDA), ensuring the basic rights of transgender, gender nonconforming and nonbinary New Yorkers will be protected under state law. When Governor Andrew Cuomo signs the bill, the state will protect these groups from harassment and discrimination in employment, housing, and public spaces.

“The Trevor Project is overjoyed to see New York state lawmakers come together to make a powerful statement of support for transgender, nonbinary, and gender nonconforming people,” said Sam Brinton, Head of Advocacy and Government Affairs for The Trevor Project. “Every day, The Trevor Project hears from youth who are afraid that being truthful about their gender identity will lead to discrimination or violence. Updating New York’s human rights laws to include gender identity will go a long way to ease those fears and allowing transgender people to simply live their lives like anybody else.”

If you or someone you know is feeling hopeless or suicidal, contact The Trevor Project’s TrevorLifeline 24/7/365 at 1-866-488-7386. Counseling is also available via chat every day at TheTrevorProject.org/Help, or by texting 678-678.