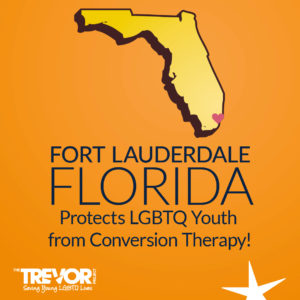 This week the City of Fort Lauderdale, Florida became the 23rd municipality in the Sunshine State to protect young people from the dangers of conversion therapy. Our local partners at Equality Florida — along with local advocates — are working in cities and counties across the state to protect LGBTQ youth, while simultaneously pushing for legislation to end the practice statewide.

The ordinance in Fort Lauderdale is especially historic as a vote was taken at the same time to pass comprehensive protections in housing, employment, and public accommodations for all LGBTQ citizens of the municipality.

“The Trevor Project applauds the City of Fort Lauderdale for the historic action they took on Tuesday. By both protecting LGBTQ youth from the dangers of conversion therapy and passing fully comprehensive protections in housing, employment, and public accommodations they have proven their commitment to our community in the most decisive way possible. LGBTQ youth will sleep easier tonight thanks knowing they are protected from conversion therapy’s harms,” said Sam Brinton, Head of Advocacy and Government Affairs for The Trevor Project.

In a statement to the media Joe Saunders, Equality Florida’s Senior Political Director, said, “This is something to celebrate. This is the first time we’ve seen such a comprehensive ordinance brought by a municipality in Florida. It’s fully comprehensive. This is transformational.”

The Trevor Project is currently working in coalition with Equality Florida, One Orlando Alliance, and other local advocates to protect minors from conversion therapy in Orange County, Florida. We expect to have more to celebrate soon.