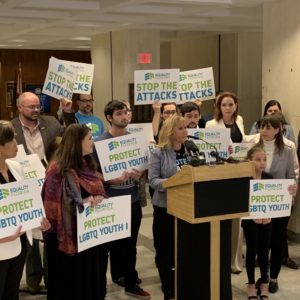 The Trevor Project is working closely with LGBTQ organizations and activists across the country in opposing an onslaught of new bills aimed at criminalizing medically necessary care for transgender youth. You can learn more about why denying best-practice, gender-affirming care would put lives at risk by reading this op-ed by Trevor’s Medical Director, Dr. Alexis Chavez.

Most recently, Trevor’s advocacy team was proud to support Equality Florida in opposing HB 1365 at a House Health Quality Subcommittee on Monday, February 3rd. With this bill, extremist politicians were threatening doctors with up to 15 years in prison for affirming trans youth in their identities. But trans advocates, allies, parents, doctors, mental health professionals, and fierce supporters from across the state showed up in full force to support trans youth and stop this bad bill.

And we won! The bill has been defeated!

The Trevor Project’s National Advocacy Campaign Manager, Troy Stevenson, was on the ground in Tallahassee to support Equality Florida’s efforts. “Stopping this bill is a resounding victory for the health, safety, and dignity of trans youth in Florida. Let this be a lesson to other states considering similar bills that vitriolic attacks on trans youth won’t be tolerated without a fight. The people elected to represent us must stop targeting the most vulnerable young humans. By holding the line and stopping this misguided legislation in its track, Equality Florida and fair-minded Floridians everywhere have helped save young lives,” said Stevenson.

The Trevor Project is monitoring similar legislation in states across the country like South Dakota and South Carolina and will continue to do all we can to assure trans youth that we are fighting for them each and every day.

If you or someone you know is feeling hopeless or suicidal, contact The Trevor Project's TrevorLifeline 24/7 at 1-866-488-7386. Counseling is also available 24/7 via chat every day at TheTrevorProject.org/Help, or by texting START to 678678.