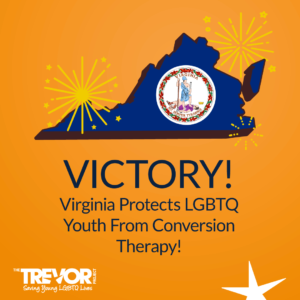 “As a survivor of this dangerous and fraudulent practice, I can’t fathom just how many young LGBTQ lives may be saved with these critical protections from conversion therapy. At The Trevor Project, we hear from LGBTQ youth in crisis every day and we know that those who are subjected to conversion therapy are more than twice as likely to attempt suicide. This bold action will send a message to all LGBTQ young people in the great Commonwealth of Virginia that they are loved and deserve support,” said Sam Brinton (they/them), Head of Advocacy and Government Affairs for The Trevor Project. “Conversion therapy has no place in modern society and as the first of many LGBTQ-affirming bills to reach the desk of Governor Northam, we are happy to sweep conversion therapy into the dustbin of history.”

The Trevor Project’s 50 Bills 50 States campaign has partnered with Equality Virginia, the Human Rights Campaign, and NCLR’s Born Perfect campaign, along with local advocates in support of these vital protections.