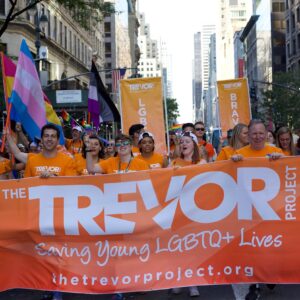 As part of philanthropist MacKenzie Scott’s donations to 116 organizations driving change around the world, The Trevor Project received a $6 million gift to support the organization’s mission to end suicide among LGBTQ young people.

The transformational gift is the single largest donation from an individual that the organization has ever received in its 22-year history. The funds are unrestricted, which allows the organization to continue to grow its crisis services to serve more of the 1.8 million LGBTQ youth estimated to seriously consider suicide in the U.S. each year.

“We’re so grateful to MacKenzie Scott for her generosity and support for LGBTQ youth suicide prevention,” said Amit Paley, CEO & Executive Director of The Trevor Project. “In our 2020 National Survey on LGBTQ Youth Mental Health, we found that 40% of respondents seriously considered attempting suicide in the past twelve months. The Trevor Project relies on major donors like MacKenzie to help us increase volunteer crisis counselor capacity and scale the organization’s technology systems so we can continue to save young LGBTQ lives 24/7.”

MacKenzie Scott and a team of nonprofit advisors assessed organizations based on their major impact on a variety of causes. Visit MacKenzie Scott’s Medium post to read more about her pledge to give the majority of her wealth back to the society that helped generate it.