The conversation around protecting Kentucky’s LGBTQ youth from conversion therapy has ramped up this month. Today, August 25th, the Kentucky State Legislature held its first-ever informational hearing on the dangers of conversion therapy in a Joint Interim Legislative Committee, which could positively impact the potential of passing statewide legislation in the future. And on August 31st, the City of Louisville will introduce a proposed ordinance that would protect LGBTQ youth from being subjected to the discredited practice of conversion therapy by licensed mental health practitioners.

“The Trevor Project is encouraged by the growing momentum against conversion therapy in the Commonwealth of Kentucky. According to our 2020 national survey, LGBTQ youth who reported undergoing conversion therapy reported more than twice the rate of attempting suicide in the past year compared to those who did not. It is critical that Kentucky lawmakers take action to protect LGBTQ youth from this dangerous and discredited practice,” said Troy Stevenson (he/him pronouns), Advocacy Campaign Manager for The Trevor Project.

In February, The Trevor Project joined our partners at The Fairness Campaign, Kentucky’s statewide LGBTQ organization, for a rally with local advocates, lawmakers, and Governor Andy Beshear.

Stevenson added, “I have been in state-houses across the nation advocating for the protection of LGBTQ youth, and the level of energy and solidarity around ending conversion therapy in Kentucky was something I had never seen before. The speakers were animated and the crowd was electric. Governor Beshear spoke passionately about protecting LGBTQ youth and reaffirmed his commitment to progress. It is inspirational to see so much support and enthusiasm in a state normally written off as ‘red.’”

The Trevor Project is proud to partner with our friends at The Fairness Campaign and Ban Conversion Therapy Kentucky in advocating for the LGBTQ youth of Kentucky. 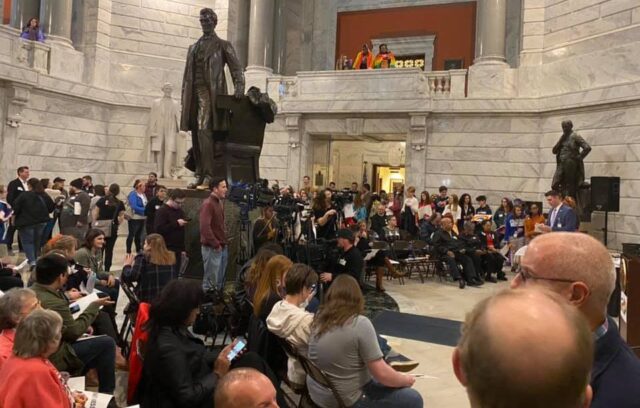