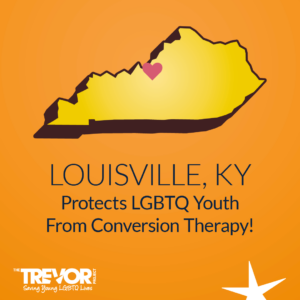 Today, September 17th, the City of Louisville passed an ordinance that prohibits licensed medical professionals from subjecting LGBTQ youth to the dangerous and discredited practice of conversion therapy. With this 24 to 1 vote, Louisville becomes the second and largest city in Kentucky to protect LGBTQ youth from conversion therapy — an action that could positively impact the potential of passing statewide legislation in the future.

“The Trevor Project is thrilled to see the largest city in Kentucky take action to protect LGBTQ youth from the dangers of conversion therapy. Based on our research, this discredited practice is strongly associated with greater rates of attempting suicide. This is a great victory for the LGBTQ youth of Louisville, and hopefully, it will encourage the passage of state-wide protections for all young people in the Bluegrass State,” said Troy Stevenson (he/him pronouns), Advocacy Campaign Manager for The Trevor Project.

Over the past few years, The Trevor Project has been proud to work with our partners at The Fairness Campaign, Kentucky’s statewide LGBTQ organization, Ban Conversion Therapy Kentucky, and grassroots advocates from across the state in pushing to protect LGBTQ youth.


If you or someone you know is feeling hopeless or suicidal, contact The Trevor Project's TrevorLifeline 24/7 at 1-866-488-7386. Counseling is also available 24/7 via chat every day at TheTrevorProject.org/Help, or by texting START to 678-678.