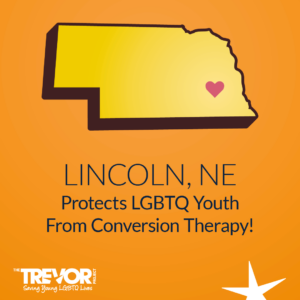 “The Trevor Project is delighted to see the great capital city of Lincoln become the first city in Nebraska to protect LGBTQ youth from the dangers of conversion therapy. We know from our research that this so-called ‘therapy’ has only ever worked to produce negative mental health outcomes and increase suicide risk,” said Troy Stevenson (he/him pronouns), Advocacy Campaign Manager for The Trevor Project. “This is a tremendous victory for the LGBTQ youth of Lincoln, and we hope it will encourage the passage of similar protections throughout the rest of the Cornhusker State.”

“There are folks who are still struggling with their identity watching this victory in Lincoln. Struggling not because of what their heart tells them, but because of the fear imposed on them by society. Let this progress be a message to our brothers, sisters, and siblings still in the closet  – We will fight for you while you are in the closet and we will be here to love you when you decide it’s time to come out,” said Council Member James Michael Bowers (he/him pronouns).

“We’re so proud to partner with Trevor Project to educate our community. Together with local mental health advocates and survivors, we highlighted the stories of the dangers of so-called conversion therapy,” says Abbi Swatsworth (she/her pronouns), Executive Director of OutNebraska. “OutNebraska aims to celebrate and empower LGBTQ+ people. Today’s vote sends a powerful message to LGBTQ+ youth in Lincoln. We look forward to continuing to protect youth in other communities and across the state.”

The Trevor Project’s Protecting with Pride campaign elevates the ongoing municipal-level fight against conversion therapy through legislation and public education in cities and counties across the United States. Over the past few years, The Trevor Project has been proud to work with OutNebraska, Nebraska’s statewide LGBTQ organization, and grassroots advocates from across the state in pushing to protect LGBTQ youth.