Carl Nassib’s historic coming out as the first openly gay, active NFL player has sparked renewed discussion about LGBTQ people’s participation in sports (Belson 2021). Nassib joins a growing number of elite athletes who are out about their LGBTQ identity. This summer’s Olympic Games in Tokyo included at least 180 openly LGBTQ athletes from around the world, including powerlifter Laurel Hubbard — the first openly transgender athlete to compete in the Olympics (Wamsley, 2021). In total, LGBTQ athletes won 33 different medals in the 2021 Olympics. Amidst all of these accomplishments, there have also been a number of attacks on LGBTQ people’s right to participate in sports. Between January and September 2021, eight states implemented laws banning transgender youth from participating in school sports (Movement Advancement Project, 2021). Our previous research indicates that sports participation is associated with lower depression among LGBTQ youth, but that LGBTQ athletes are less likely to be out about their LGBTQ identity compared to LGBTQ youth who do not participate in sports (The Trevor Project 2020a, The Trevor Project 2020b). More research is needed to understand the role that sports play in the lives of LGBTQ youth. This brief uses data from The Trevor Project’s 2021 National Survey on LGBTQ Youth Mental Health to examine LGBTQ young people’s experiences and attitudes about sports. 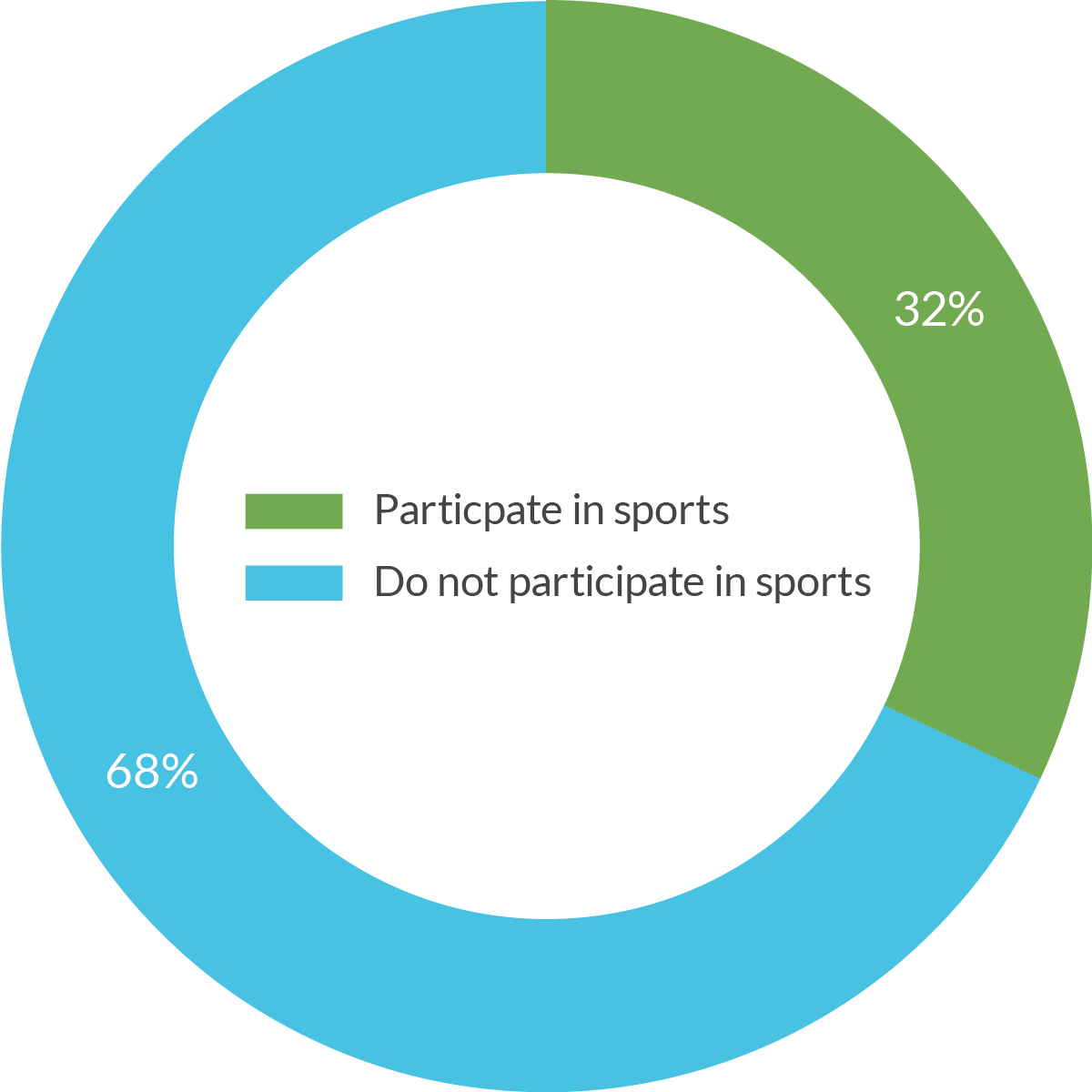 A number of LGBTQ youth reported choosing not to participate in sports due to reasons related to discrimination or fear of LGBTQ-based discrimination. One youth described simply, “I’m scared I will be harassed because of my sexuality.” Locker rooms were a particular source of stress for LGBTQ youth, with one youth reporting “girls in my class don’t want me to change in the locker room with them because they think I’ll stare at them/hit on them because I’m lesbian.” Another explained, “I never hated sports, but I hated how I was treated by kids and adults who played sports. The locker room was always a nightmare, the athletic kids at my school hated me, the coaches at my school hated me, and as much as I didn’t care for a lot of mainstream sports in general, I avoided athletic activities out of terror, not disinterest.” Transgender and nonbinary youth noted structural barriers, including policies that prevented them from playing on the team associated with their gender. One youth described, “I probably wouldn’t be allowed onto the boys’ team because I’m a trans boy (both parents and school won’t allow this), and even if I was allowed I’d be at a huge risk of bullying.” LGBTQ youth also reported a number of additional reasons for not participating, including lack of interest, lack of funds or transportation, and having a health condition that prevents them from participating.

Comradery and personal wellness were common reasons why LGBTQ youth chose to participate in sports. Many LGBTQ youth who participated in sports valued the connections and friendships they developed with their teammates. One respondent described, “I’ve met some of my closest friends through being an athlete.” Another said that they enjoyed “being part of a team that pushes me.” Some LGBTQ youth said that they enjoyed the competition and had fun playing, and others reported that sports were a good way to be active and healthy. A number of youth described how participating in sports helped their mental health. One youth noted that sports “help me cope with gender dysphoria and depression.” Another agreed, “I find that sports are a good way to distract me from negative thoughts.” Several respondents described how sports helped them manage various stressors, such as pressure at school or tension around their LGBTQ identity.

Our data show nearly one in three LGBTQ youth surveyed participate in sports. This rate is lower than that of the broader population of youth in the United States, with more than half participating in sports in any given year (U.S. Department of Health and Human Services, 2019). LGBTQ youth who participated in sports reported hearing negative things about LGBTQ people from sports leaders or coaches at comparable rates to hearing positive things about LGBTQ people. LGBTQ youth also had very low rates of reporting they would turn to a sports leader or coach if they were experiencing mental distress. Further, many LGBTQ youth reported that they didn’t participate in sports due to concerns about discrimination and harassment from peers and coaches, fears of how others would react to their LGBTQ identity, and policies preventing them from playing on the team that matches their gender identity. Given the existing mental health and suicide disparities experienced by LGBTQ youth compared to their straight and cisgender peers, there is an urgent need to provide sports leaders and coaches with training on ways to better support LGBTQ youth athletes and their mental health. Such training is needed to ensure that every team in every league can provide a welcoming and affirming environment.

LGBTQ youth who play sports report a variety of positive reasons for participating, including connecting with friends and teammates, opportunities for fitness and health, and the fun of participation. Importantly, many LGBTQ youth who play sports describe sports as supporting their mental health, helping them cope with stress, and distracting them from negative thoughts. There is a need for policies and practices focused on expanding access to the positive benefits of sports rather than prohibiting youth from being able to access the positive aspects of sports. As part of The Trevor Project’s mission to end suicide among LGBTQ youth, we recognize the need to make sports inclusive to all LGBTQ youth who wish to participate. No young person should be barred from the benefits of sports participation — friendship, fun, and stress relief — due to their sexual orientation or gender identity. Our Advocacy Team actively works to oppose legislation categorically banning transgender youth from participating in sports. Further, our Public Education team provides training for organizations and sports leaders on ways to better affirm LGBTQ youth and support their mental health. Finally, our Crisis Services team works 24/7 to provide affirmation and support for all LGBTQ youth. All LGBTQ young people deserve the right to participate and thrive in the benefits of organized sports free from discrimination or harassment. Policies that seek to ban transgender youth from sports only serve to heighten experiences of stigma and reduce the ability of youth to receive the positive physical, social, and emotional benefits of sports.