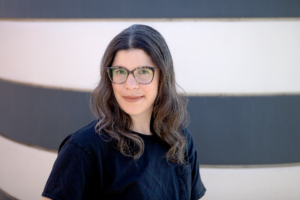 Ground-breaking, creative juggernaut, Rebecca Sugar (she/they) is an animator, director, screenwriter, producer, and songwriter. They are best known for their Emmy-Nominated, GLAAD and Peabody award-winning series, STEVEN UNIVERSE, on which they served as executive producer, director, head writer, storyboard artist, and songwriter. Prior, they were a writer, storyboard artist, and songwriter on ADVENTURE TIME. Rebecca has been fighting for LGBTQIA+ content in children’s media since 2010, and for a more inclusive environment both on screen and behind the scenes in the animation industry.