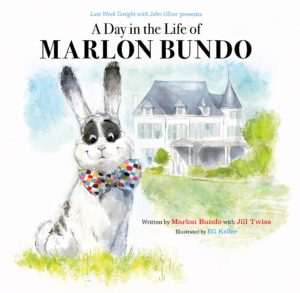 New York, NY — The Trevor Project sent 100 copies of “A Day in the Life of Marlon Bundo”, an illustrated children’s book that explores topics of acceptance and marriage equality, to Immanuel Christian School, where it was reported that Karen Pence will teach art. The Trevor Project is the world’s largest suicide prevention and crisis organization for LGBTQ young people.

“The Trevor Project hears from young people every day about their experiences with rejection at home and school – places where they should feel the safest,” said Amit Paley, CEO & Executive Director of The Trevor Project. “We know that lesbian, gay, and bisexual youth from rejecting families are more than eight times more likely to attempt suicide than their straight peers. We hope Immanuel Christian School will adopt policies of inclusion for LGBTQ young people that make them feel safe, accepted, and loved.”

Included with the donated books is a heartfelt note that encourages the school’s leaders to accept LGBTQ young people. Immanuel Christian School’s “Essentials of the Faith” parent agreement states that the school can refuse students or discontinue enrollment if they participate in, support, or condone “homosexual activity or bi-sexual activity,” and says they must embrace that marriage is only “between one man and one woman.” Additionally, the school’s “Employment Application” explicitly does not allow its employees to engage is “homosexual or lesbian sexual activity” and “transgender identity.”

“As an alumnus of Immanuel Christian School, I am a living example that intolerance, both in policy and rhetoric, are harmful to the mental wellness and development of LGBTQ students, who are desperately looking for ways to fit in,” said Luke Hartman, an out gay man. “The silent and spoken messages of rejection that are constantly felt by LGBTQ students directly impact the relationship they have with their faith, education, and relationships with family and friends — ultimately resulting in a feeling of being less than when compared to their straight and cisgender peers.”

According to the CDC, suicide is the 2nd leading cause of death among young people. Lesbian, gay, and bisexual (LGB) youth are more than four times more likely to attempt suicide than their straight peers, and nearly half of all trans people have made a suicide attempt — many before the age of 25. A third of all LGB youth are bullied at school, and one tenth of LGB students reported not attending school because of safety concerns.

People can support LGBTQ youth and receive a digital copy of “A Day in the Life of Marlon Bundo”.

If you or someone you know is feeling hopeless or suicidal, contact The Trevor Project’s TrevorLifeline 24/7/365 at 1-866-488-7386. Counseling is also available via chat at TheTrevorProject.org/Help, or by texting 678-678.