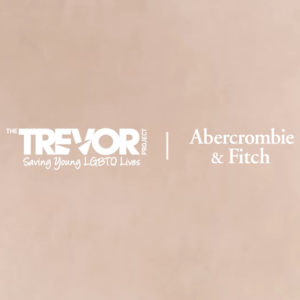 New Albany, Ohio — Abercrombie & Fitch, a division of Abercrombie & Fitch Co. (NYSE: ANF), is excited to announce the details of its 2019 year-long partnership with The Trevor Project, the world’s largest suicide prevention and crisis intervention organization for lesbian, gay, bisexual, transgender, queer and questioning (LGBTQ) young people. A&F has supported The Trevor Project since 2010 and is proud to expand its partnership in 2019 – which also marks the 50th anniversary of Stonewall, an event that spurred the modern-day fight for LGBTQ rights in the U.S. This partnership strives to bring further awareness and funding to The Trevor Project’s critical, life-saving work.

With a 126-year heritage of outfitting customers in their pursuit of life and adventure, A&F aims to inspire and encourage its customers to be themselves, to live life freely, to belong, and to reach for their dreams. The Trevor Project shares in A&F’s passion to encourage safe, confident self-expression for individuals of all sexual orientations and gender identities. The expanded partnership will include participation at events such as the Pride Parade in NYC, proceeds* of sales from select A&F collections, and a customer round-up campaign in all U.S. stores and online. Since 2010, A&F and its customers have raised and donated more than $600,000 for the organization. In 2018, donations specifically funded the training of digital crisis counselors, allowing the organization to reach even more of the 1.5 million LGBTQ youth estimated to be in crisis each year.

Designated by the Human Rights Campaign as a “Best Place to Work for LGBTQ Equality” every year for the past 13 years, A&F Co. is committed to equality and is focused on making a positive impact on its associates’, customers’ and partners’ lives. Through this partnership, The Trevor Project will closely collaborate with A&F Co.’s corporate teams on diversity and inclusion initiatives, including LGBTQ-competent associate training, ensuring its LGBTQ customers know they are loved, valued, and never alone.

“We are grateful for Abercrombie & Fitch’s dedication to The Trevor Project’s mission to end suicide among LGBTQ youth,” said Amit Paley, CEO & Executive Director of The Trevor Project. “Abercrombie & Fitch understands the need to help LGBTQ youth in crisis is year-round. We look forward to working together to engage the brand and its loyal customers in support of our life-saving mission.”

“Abercrombie & Fitch is honored to grow our partnership with The Trevor Project, as it works to meet the needs of LGBTQ youth with its vital crisis intervention and suicide prevention services,” said Kristin Scott, President, Global Brands at Abercrombie & Fitch Co. “Trevor’s work touches many of our customers’ lives daily, and we are optimistic that by expanding our partnership, we can help increase the reach and impact of Trevor’s important work.”

*Up to $100,000 from the Pride Collection and Fierce will be donated to the Trevor Project.

A&F cautions that any forward-looking statements (as such term is defined in the Private Securities Litigation Reform Act of 1995) contained herein or made by management or spokespeople of A&F involve risks and uncertainties and are subject to change based on various important factors, many of which may be beyond the Company’s control. Words such as “estimate,” “project,” “plan,” “believe,” “expect,” “anticipate,” “intend,” and similar expressions may identify forward-looking statements.  Except as may be required by applicable law, we assume no obligation to publicly update or revise our forward-looking statements. The factors disclosed in “ITEM 1A. RISK FACTORS” of A&F’s Annual Report on Form 10-K for the fiscal year ended February 2, 2019, in some cases have affected, and in the future could affect, the company’s financial performance and could cause actual results for Fiscal 2019 and beyond to differ materially from those expressed or implied in any of the forward-looking statements included in this press release or otherwise made by management.

Abercrombie & Fitch is a specialty retailer of high quality apparel and accessories for men and women. For more than 125 years, the iconic brand has outfitted innovators, explorers and entrepreneurs. Today, it reflects the updated attitude of the modern consumer, while remaining true to its heritage of creating expertly crafted products with an effortless, American style.