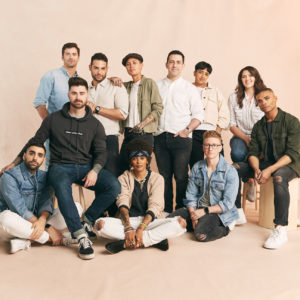 New Albany, Ohio — Abercrombie & Fitch, a division of Abercrombie & Fitch Co. (NYSE: ANF), is proud to announce its latest initiative with The Trevor Project, the world’s largest suicide prevention and crisis intervention organization for lesbian, gay, bisexual, transgender, queer and questioning (LGBTQ) young people, as part of the retailer and nonprofit’s year-long partnership. In time for Pride month, which this year marks the 50th anniversary of Stonewall, an event that spurred the modern-day fight for LGBTQ rights in the U.S, A&F will feature LGBTQ activists and ambassadors for The Trevor Project throughout its #FaceYourFierce campaign.

The campaign sees the cast share personal experiences of Fierceness, which aim to send messages of hope and support to LGBTQ youth in crisis. The content will be shared across both organizations’ digital channels, in Abercrombie stores and paid media throughout the month of June. A&F will donate a portion of proceeds of Fierce sales and its Pride Collection**, and customers have the opportunity to round up their purchase in U.S. stores and online through the month of June. The funds raised in this campaign hope to bring further awareness and reach to The Trevor Project’s work which aims to touch the lives of 80,000 youth in 2019, a significant increase on previous years.

“We are excited to share our #FaceYourFierce narrative through members of the LGBTQ community, ahead of this historic Pride month,” said Kristin Scott, President, Global Brands at Abercrombie & Fitch Co. “We hope that these personal and inspiring stories will help bring further attention to The Trevor Project’s essential work.”

“When LGBTQ young people see diverse public figures like the Trevor ambassadors in the #FaceYourFierce campaign, they feel seen and know that they are not alone,” said Amit Paley, CEO & Executive Director of The Trevor Project. “That’s what we do every day at The Trevor Project, and we are grateful to Abercrombie & Fitch for their ongoing support of LGBTQ youth and our mission to save LGBTQ young lives.”

The partnership between A&F and The Trevor Project began in 2010. To date, A&F Co. and its customers have donated more than $600,000 to the nonprofit, with donations in 2018 funding its digital crisis counselors training, specifically. This partnership will continue throughout 2019 with a series of product collections and events, including participation in the New York City Pride March on June 30, 2019.

About The Trevor Project:

Abercrombie & Fitch is a specialty retailer of high-quality apparel and accessories for men and women. For more than 125 years, the iconic brand has outfitted innovators, explorers and entrepreneurs. Today, it reflects the updated attitude of the modern consumer, while remaining true to its heritage of creating expertly crafted products with an effortless, American style.