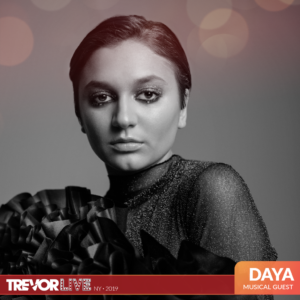 New York — Today, The Trevor Project announced that GRAMMY-Award winning multi-platinum singer/songwriter Daya and the cast of the Broadway musical, The Prom, will perform at the organization’s TrevorLIVE New York gala in New York City on Monday, June 17 at Cipriani Wall Street. The organization also announced that Queer Eye’s Antoni Porowski and Jonathan Van Ness will present Cara Delevingne with the 2019 Hero Award, and actor Jonathan Tucker will present Kelly Ripa and Mark Consuelos with the Champions Award.

“We’re so excited to have live performances by Daya and the cast of The Prom at this year’s TrevorLIVE New York,” said Amit Paley, CEO and Executive Director of The Trevor Project. “They continue to use their voices to uplift and affirm LGBTQ young people around the world, and we’re grateful for their support of our mission to end suicide among LGBTQ youth.”

Since making her debut with 2016’s double-platinum “Hide Away”, 20-year-old singer/songwriter Daya won her first ever Grammy Award for her smash collaboration with The Chainsmokers “Don’t Let Me Down” (6x platinum), released a gold-certified album, and headlined a national tour. Just months after debuting at #5 on Billboard’s 21 Under 21 list in 2016, the Pittsburgh-born artist emerged as the youngest honoree on Forbes’ 30 Under 30 music list in 2017. Since then, in addition to signing with Interscope and releasing three of her own singles (“New”, “Safe”, and “Insomnia”), Daya has collaborated with Gryffin/Illenium (‘Feel Good”) and RL Grime (“I Wanna Know”). Currently finishing up a sophomore album which will showcase the full depth of her talent and artistry, Daya hopes to continue the conversation on love, life, and the current state of our world with her fans. “Insomnia” is just the first of several singles from her upcoming album set to release in 2019.

“I am looking forward to performing and being a part of this year’s TrevorLIVE New York,” said Daya, “As a member of the LGBTQ community, I‘m excited to stand with my fellow queers and show support to all members of the community to let them know that they are valid and they are loved.”

The Prom is a new musical comedy about Broadway stars on a mission to change the world, a girl who wants to change her small town, and a love that brings them all together. It received accolades from  New York Magazine and The New York Times declares a Critic’s Pick and was nominated for 7 Tony Awards.