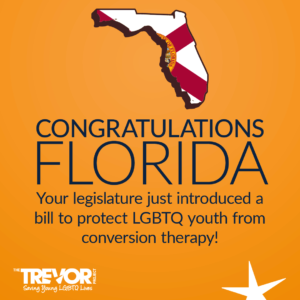 “In most states it is still legal to force children into conversion therapy and that is wrong. When it comes to this debunked practice, there is no conversion and there is no therapy. So-called conversion therapy does not work because youth are who they are. They should be supported rather than shamed. More importantly, the practice we seek to ban is not therapy.” said Sen. José Javier Rodríguez (D Miami) “The long-term, even lethal, damage it does to youth is well documented. If you’re going to be a licensed practitioner in Florida, refraining from harming our youth with this debunked practice should be a basic requirement.”

A poll released in 2017 showed 71% of Floridians support banning conversion therapy for minors. Twenty local governments in Florida – both cities and counties – have adopted conversion therapy bans, which is more than in any other state in the country.

“The Trevor Project is deeply invested in ending conversion therapy in every state because we know youth who experience rejection from their family are more than 8 times more likely to attempt suicide than youth from accepting families,” said Amit Paley, CEO and Executive Director of The Trevor Project, the world’s largest suicide prevention and crisis intervention organization for LGBTQ youth. “Conversion therapy is a profoundly dangerous form of rejection with no basis in medicine or science. Unless lawmakers act to end the practice in every state, countless LGBTQ youth will be subjected to forms of conversion therapy in the next few years.”“Conversion therapy is a deceptive and utterly discredited practice that targets some of the most vulnerable in our state – LGBTQ young people,” said Jon Harris Maurer, Equality Florida’s Public Policy Director. “It’s time to put an end this dangerous abuse disguised as medical treatment.”

Equality Florida applauds José Javier Rodríguez for filing this critical legislation that would protect young people from this fraudulent practice.

“We are grateful to Senator José Javier Rodríguez for kicking off what we hope will be another successful year in the fight to end conversion therapy,” said Sam Brinton, Head of Advocacy & Government Affairs for The Trevor Project. “The Trevor Project’s 50 Bills 50 States campaign works to support legislation like SB 84 to protect LGBTQ youth from conversion therapy in every state in the country and we look forward to working with leaders and advocates in Florida to turn this bill into law.”

People can sign up to join The Trevor Project’s effort to end conversion therapy by texting “TREVOR” to 40649.