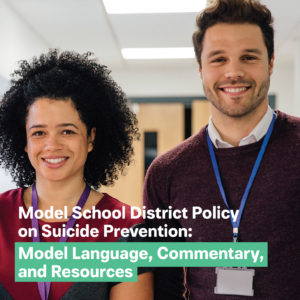 NEW YORK (September 9, 2019) – Suicide prevention among young people is a growing concern across the country. According to the National Youth Risk Behavior Survey (YRBS), 31.5 percent of American high school students reported experiencing persistent feelings of sadness or hopelessness, and 17.2 percent reported they have seriously considered attempting suicide in the past year. This alarming shift has significant implications for schools, which have a critical role and responsibility in identifying and providing interventions for students at risk for suicide ideation and behavior.

Having effective suicide prevention policies is essential to meeting this responsibility. To support schools’ efforts, four leading national organizations — the American Foundation for Suicide Prevention, the American School Counselor Association, the National Association of School Psychologists and The Trevor Project — have collaborated to update the Model School Policy, a comprehensive guidebook for school administrators and policy makers containing best practices in suicide prevention, intervention and postvention policies for K–12 schools.

Access to an evidence-based model policy matters. In 2014 when the first Model School Policy was released, only five states required suicide prevention procedures for their school districts. Today, through the efforts of the above organizations and other volunteer advocates, there are 22 states with laws that require K–12 school districts to have a suicide prevention policy in place. These laws generally require all school districts in the state to have a policy about how to help students who have suicidal ideation. However, states often do not know what kind of policy this should be.

The Model School Policy provides a template for school districts to use as a guide when developing their own policies. The document is based on suicide prevention research about the best way for schools to help those students who live with suicidal ideation. This document is free and available to the public.

“Suicide is the second lead cause of death in young people ages 10–24. We know that teachers and others who interact with students daily are in a prime position to recognize the signs of suicide risk, and to make appropriate referrals. This document was created to provide further guidance to schools on how to best address suicide attempts and to support students who may be experiencing suicidal ideation,” said Dr. Doreen Marshall, AFSP Vice President of Programs.

“After The Trevor Project reviewed thousands of school districts’ suicide prevention policies, it is clear that model policies can help equip school staff with the resources and guidance needed to save young lives. Lesbian, gay, bisexual, transgender and non-binary youth are more than 4 times more likely to attempt suicide than their peers, so it’s imperative for school suicide prevention policies to also be LGBTQ competent. In addition, our research shows that more than half of LGBTQ youth are not out to a single adult in school; these policies show LGBTQ youth, out or not, that their school is a safe place for them to learn, and that school staff are prepared to help them in times of crisis,” said Sam Brinton, Head of Advocacy and Government Affairs for The Trevor Project.

The revision of this document began in May of 2018 with experts from all four leading organizations weighing in along the way. Oftentimes suicide prevention plans are developed at the district level and then implemented at the school level. This document is helpful for both. Topics covered in the revision include:

“Every youth suicide is a preventable tragedy, but prevention requires systematic, sustained and intensive effort on the part of schools, families and communities,” stated Dr. Kathleen Minke, NASP Executive Director. “This model policy will be enormously helpful to school districts in creating effective policies that support the mental health and wellness of all students, and enable school personnel, like school psychologists and counselors, to provide critical supports.”

The revisions in this document reflect current language we use to talk about suicide and delve more into parental involvement, and school re-entry (when a student returns to school after a suicide attempt).

“Community action is critical in our efforts to decrease the rate of youth suicides in the U.S.,” said Kwok-Sze Wong, Ed.D.,ASCA executive director. “Through the collaborative efforts of our organizations, this model policy will provide families, educators and community stakeholders with essential information and resources to help support the social and emotional health of students.”

To help teachers, principals and school administrators implement the Model School Policy, leading experts from the organizations that wrote the policy will be hosting a free one-hour webinar at 11 a.m. Eastern on October 9, 2019. To register for this webinar, visit: https://forms.gle/kzCk5SeKonvNFB1Q7.

To find out if your school district has a suicide prevention policy, check their website or call the district superintendent.

The American Foundation for Suicide Prevention is dedicated to saving lives and bringing hope to those affected by suicide. AFSP creates a culture that’s smart about mental health through education and community programs, develops suicide prevention through research and advocacy, and provides support for those affected by suicide. Led by CEO Robert Gebbia and headquartered in New York, and with a public policy office in Washington, D.C., AFSP has local chapters in all 50 states with programs and events nationwide. Learn more about AFSP in its latest Annual Report, and join the conversation on suicide prevention by following AFSP on Facebook, Twitter, Instagram, and YouTube.

The National Association of School Psychologists (NASP) represents more than 24,000 school psychologists who work with students, educators, and families to support the academic achievement, positive behavior, and mental wellness of all students. NASP promotes best practices and policies to ensure students have access to the prevention and intervention services to ensure they need to be successful at home, at school, and throughout life. Learn more at www.nasponline.org.