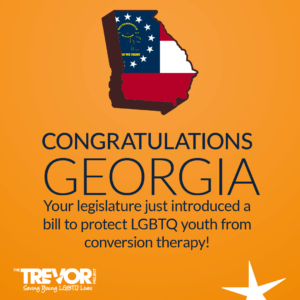 “All children in Georgia should receive care that first, does no harm.  Conversion therapy has no scientific basis and contradicts the medical community’s understanding of sexual orientation and gender identity,” said Representative Matthew Wilson. “I am proud to sponsor this bill that helps ensure the safety of Georgia’s LGBTQ youth by outlawing this incredibly dangerous practice.”

Organizations like The Trevor Project and the American Foundation for Suicide Prevention are invested in ending conversion therapy in every state because lesbian, gay, and bisexual youth from highly rejecting families are more than 8 times more likely to attempt suicide than youth from accepting families. Being subjected to conversion therapy is often a particularly extreme form of family rejection.

“There is no question. Georgia must protect LGBTQ youth from the harms of conversion therapy,” said Sam Brinton, Head of Advocacy and Government Affairs for The Trevor Project. “As The Trevor Project continues to hear from young Georgians in crisis, we know this legislation will save lives, and we’re committed to seeing it start a critical conversation in the Peach State.”

Converse seeks to ensure that Georgia’s children are safe and supported, and advocates for passage of legislation that prohibits mental health professionals licensed in Georgia from providing conversion therapy services to minors.

The Trevor Project’s 50 Bills 50 States campaign works to support legislation like HB 580 to protect LGBTQ people from conversion therapy in every state. 50 Bills 50 States is the largest grassroots campaign in the world endeavoring to protect LGBTQ youth from this dangerous and discredited practice. The organization partners with mental health associations, youth organizations, LGBTQ groups, student clubs, faith communities, and educational institutions in every state by sharing stories, mobilizing volunteers, and informing policymakers to promote the submission and passage of powerful legislation. People can sign up to join The Trevor Project’s effort to end conversion therapy by texting “TREVOR” to 40649.

ABOUT AMERICAN FOUNDATION FOR SUICIDE PREVENTION

The American Foundation for Suicide Prevention is dedicated to saving lives and bringing hope to those affected by suicide. AFSP creates a culture that’s smart about mental health through education and community programs, develops suicide prevention through research and advocacy, and provides support for those affected by suicide. Led by CEO Robert Gebbia and headquartered in New York, and with a public policy office in Washington, D.C., AFSP has local chapters in all 50 states with programs and events nationwide. Learn more about AFSP in its latest Annual Report, and join the conversation on suicide prevention by following AFSP on Facebook, Twitter, Instagram, and YouTube.