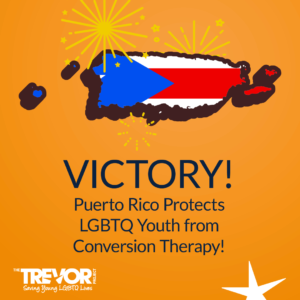 “We are grateful for Gov. Ricardo A. Rosselló for taking decisive action to protect LGBTQ youth from conversion therapy,” said Sam Brinton, Head of Advocacy and Government Affairs for The Trevor Project. “LGBTQ youth in crisis reach out to us every day, including young people from Puerto Rico, and this action will undoubtedly save young LGBTQ lives.”