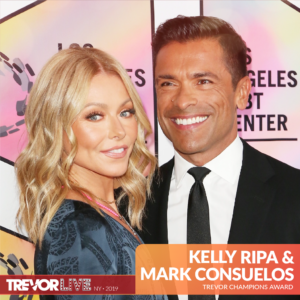 New York — Today, The Trevor Project announced that talk show host, actress and producer Kelly Ripa and actor and producer Mark Consuelos will jointly be honored at the organization’s TrevorLIVE New York gala with the Champions Award for their continued allyship and commitment to supporting The Trevor Project’s mission to end suicide among LGBTQ (Lesbian, Gay, Bisexual, Transgender, Queer, and Questioning) young people. The organization will also honor EY with the 20/20 Visionary Award for the company’s work supporting LGBTQ inclusion around the world and creating a sense of belonging for all EY professionals. In addition, actress, comedian and writer Nicole Byer and actor, director and digital producer Eugene Lee Yang will co-host TrevorLIVE New York, the organization’s annual star-studded signature fundraiser, on Monday, June 17 at Cipriani Wall Street in New York City. As previously announced, actress, musician, and style icon Cara Delevingne will be honored with the 2019 Hero Award.

“We’re so excited to honor Kelly Ripa, Mark Consuelos and EY at this year’s TrevorLIVE New York — they remain committed allies to the LGBTQ community at a time when LGBTQ youth need more support than ever, ensuring that they know they are beautiful and deserving of love for who they are,” said Amit Paley, CEO & Executive Director of The Trevor Project. “Combined with this year’s creative and funny co-hosts, Nicole Byer and Eugene Lee Yang, this year’s TrevorLIVE New York 2019 will help to raise visibility and support for our life-saving work on behalf of LGBTQ young people.”

“The Trevor Project is a remarkable nonprofit we’ve been proud to support for nearly a decade,” said Mark Consuelos and Kelly Ripa. “Their work, now more than ever, is so incredibly important and we are honored to be proponents of an organization that provides immeasurable support and love to young members of the LGBTQ community.”

The 20/20 Visionary Award will be accepted by EY’s Vice Chair and East Region Managing Partner, Rich Jeanneret. Rich is the Executive Sponsor of EY’s Unity network who uses his platform as a forward-thinking business leader to advance inclusion, transgender equality and LGBTQ rights. Rich will be joined by his wife Lisa, son Henry, who is a member of the transgender community, other family members and EY colleagues. Together, the Jeanneret family, advocates to further transgender equality, to promote community and to support other parents of transgender young people.

Eugene Lee Yang, who previously hosted TrevorLIVE LA in 2018 when the evening raised over $1.5M, is one of today’s most prolific digital content producers and performers whose collective work has been viewed billions of times. This past year, he and his fellow cofounders of the unscripted comedy series The Try Guys created their own independent production company, 2nd Try, and their new YouTube channel amassed over 5 million subscribers in 6 months. Together, they hosted the 2018 Streamys where they won Show of the Year, wrote their debut book, The Hidden Power Of F*cking Up, launched their podcast The TryPod, and are embarking on a nationwide live tour – Legends Of The Internet – this summer. Yang is well-known for being a prevalent voice for Asian and LGBTQ representation in the digital space. He also recently made his acting debut, appearing in Brooklyn Nine-Nine and in the upcoming indie film Spring Bloom, with a number of more traditional projects in development. As one of YouTube’s most-watched personalities, Yang has pioneered a uniquely hilarious, unapologetically controversial, and intimately complex image of the modern Asian American and continues to incorporate strong themes influenced by his Korean, Southern, and queer backgrounds into his projects.

An actress, comedian and writer, Nicole Byer does it all. She hosts the baking show Nailed It currently streaming on Netflix and has a sitcom loosely based on her life streaming on Facebook Watch called Loosely Exactly Nicole. Byer also appears in the new Netflix animated series Tuca & Bertie alongside Tiffany Haddish and Ali Wong and continues to host her popular weekly podcast Why Don’t You Date Me?. She recently starred on the Fox sketch show Party Over Here. Additional credits include: MTV’s Girl Code, 30 Rock, Tonight Show with Jimmy Fallon, Mike and Dave Need Wedding Dates, @MIDNIGHT, Adult Swim, Chelsea Lately, Transparent, and Lady Dynamite.  Nicole co-wrote and starred in the Pursuit of Sexiness which Variety named a “Web Series to Watch.” She was featured as a Time Out LA “Comic to Watch” in 2015, and Refinery29 says she’s a female comic to look out for. Nicole has also been featured in Cosmopolitan, Ladies Home Journal, Elle, and Ebony.