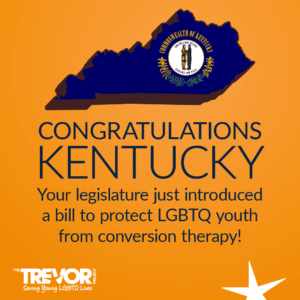 The State of Kentucky took a bold step this month to protect LGBTQ youth from the dangerous and discredited practice of conversion therapy in 2018. Conversion therapists falsely claim be able to change LGBTQ youth into straight and cisgender youth. Prominent professional health associations—including the American Medical Association, the American Psychological Association, and the American Academy of Pediatrics, among numerous others—oppose the use of conversion therapy on youth, calling the practice harmful and ineffective. If successful, Kentucky would be the 10th state to pass legislation limiting the practice though another 40 states still allow this terrible crisis to continue.

Tanner Mobley, a student at Bellarmine University who has been passionately working to end conversion therapy in Kentucky added, “Conversion therapy is torture. Not only is it ineffective and dangerous for those who endure it, but it also fuels a narrative that LGBTQ people can and should change who they are. We need legislation in Kentucky to ensure not one more LGBTQ experiences the life long pain it causes.”