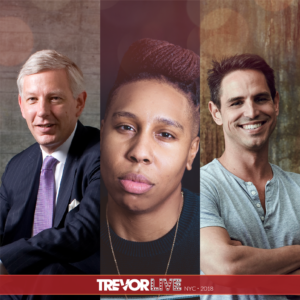 The Organization, Which is Celebrating its 20th Anniversary, Will Award its Honorees at a Star-Studded Gala on June 11 in New York City

Waithe, who will be honored with the Hero Award, made history in 2017 by accepting the Emmy Award for Outstanding Writing in a Comedy Series for her work on “Master of None,” becoming the first woman of color to do so. The episode, which won her the accolade, chronicles her coming out to herself and her family, through the lens of the Thanksgiving holiday over three decades. Directed by Melina Matsoukas, the episode is largely based on Waithe’s personal experience.  As a writer, Waithe is currently serving as creator and executive producer of “The Chi,” a relevant, timely, and distinctive coming-of-age story that follows six interrelated characters in Chicago’s South Side that finished its first season to rave reviews and was quickly picked up for a second season. In addition to “The Chi,” TBS recently picked up her pilot, “Twenties,” for which she will serve as writer and producer. The project is loosely based on her turbulent twenties and how she navigated her first decade of Los Angeles living.  As an actor, she was most recently seen on the big screen in Steven Spielberg’s “Ready Player One,” which was released by Warner Bros to great success.

“It’s one of the greatest honors of my life to be honored by such a phenomenal organization like The Trevor Project,” said Waithe. “The work that they do is invaluable to the community, and I hope to continue to do work that is worthy of this honor.”

Greg Berlanti, who will also receive the Hero Award, is best known for his work as executive producer and co-creator of The CW’s “Arrow,” “The Flash,” “DC’s Legends of Tomorrow,” and “Supergirl,” collectively referred to as The CW’s Arrowverse. Additionally, Berlanti serves as executive producer on The CW’s “Riverdale,” “Black Lightning,” and NBC’s “Blindspot.” Berlanti made his film directorial debut in 2000 with “The Broken Hearts Club” and his most recent directorial project is the critically acclaimed “Love, Simon,” an adaptation of the acclaimed YA novel “Simon Vs. The Homo Sapiens Agenda.”

“I am honored to accept the Hero Award at TrevorLIVE New York this year,” said Berlanti. “I have immense admiration for The Trevor Project and their ongoing efforts to provide a safe place for the LGBTQ community and youth in need.”

Barton, who will receive the 20/20 Visionary Award, is a top management thinker and outspoken advocate for empowering talent to create long-term economic and social value. As the Global Managing Partner of consulting firm McKinsey & Company, he seeks to empower young, ambitious individuals to make a difference in business and society, working with McKinsey’s thousands of clients around the world across the private, public, and social sectors. The company’s core mission revolves around building an inclusive environment for exceptional people regardless of background.

“At McKinsey, we strive every day to build a firm that is made stronger by its diversity,” said Barton. “I am personally honored and humbled to accept the 20/20 Visionary Award on behalf of McKinsey and am deeply inspired by the life-saving work that The Trevor Project is doing for LGBTQ youth and for the broader community.”

“Lena Waithe, Greg Berlanti, and Dominic Barton have each made an unprecedented positive impact on the lives of young LGBTQ people in the last year,” said Amit Paley, CEO and Executive Director of The Trevor Project. “We’re incredibly excited to honor them for their commitment to fostering an accepting environment for LGBTQ youth through their innovative work and leadership at TrevorLIVE New York as we join together to continue The Trevor Project’s important and life-saving work.”

Additional names, including the host and performer for TrevorLIVE New York, will be announced in the coming weeks. For more information on TrevorLIVE NY, please visit https://ny.trevorlive.org

**A note to media: credentials are required to cover the TrevorLIVE New York gala. To apply, please complete the online application by 5pm ET on Monday, May 28.

TrevorLIVE is the signature annual fundraising event of The Trevor Project. This annual event brings together top entertainers and corporate leaders to support the organization’s life-saving initiatives. Learn more about TrevorLIVE at http://ny.trevorlive.org.