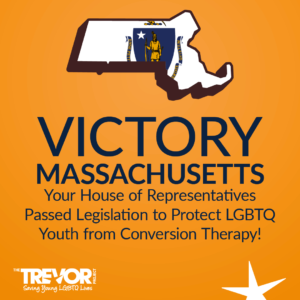 From the office of Representative Kay Khan, Massachusetts Legislature

BOSTON, MA – State Representative Kay Khan (D-Newton) joined her colleagues in the Massachusetts House of Representatives to pass H.140, An Act relative to abusive practices to change sexual orientation and gender identity in minors. This legislation, also known as the “Conversion Therapy Ban Bill,” was introduced by Representative Khan, and co-sponsored by 116 state legislators.

“As a psychiatric nurse, the House Chair of the Joint Committee on Children, Families and Persons with Disabilities, and a longtime advocate for LGBTQ rights, I am honored to sponsor H.140,” said Chairwoman Khan. “The bill is a commonsense measure to ensure medically sound, professional conduct by state-licensed health providers and to protect LGBTQ youth from being exposed to fraudulent, ineffective and very harmful practices. I thank Speak DeLeo for his support and swiftly bringing this bill to the House floor to protect the LGTBQ youth in the Commonwealth.”

Currently, state-licensed health providers are legally allowed to subject children, under the age of 18, to harmful and abusive conversion therapy practices to their change sexual orientation or gender identity. Such practices include, but are not limited to, efforts to change behaviors or gender expressions, or to eliminate or reduce sexual or romantic attractions or feelings toward individuals of the same sex. Editor’s note: learn more about reporting on conversion therapy here.

A 2018 study found that the rate of attempted suicide by LGBTQ youth whose parents tried to change their sexual orientation was more than double the rate of LGBTQ youth who reported no such attempts. For LGBTQ young people who reported both home-based efforts to change their sexual orientation by parents and efforts by therapists or religious leaders, the rate was three times higher. Organizations like The Trevor Project, the world’s largest suicide prevention and crisis intervention organization for LGBTQ youth, are invested in ending conversion therapy in every state.

“As a survivor of the dangers of conversion therapy and former resident of the great Commonwealth of Massachusetts, today’s overwhelming vote in support of our LGBTQ youth is a moment I will truly cherish,” said Sam Brinton, Head of Advocacy and Government Affairs for The Trevor Project. “Being a part of this legislation from its inception has been important to me as we work to protect youth in every single state across the country.”

“It’s time to protect children by prohibiting the cruel and discredited practice of conversion therapy for minors,” said Arline Isaacson, Co-Chair of the Coalition to Ban Conversion Therapy for Minors.

The bill now moves to the Senate. If enacted and signed by the Governor, Massachusetts will become the sixteenth state, along with Washington, D.C., to ban conversion therapy practices aimed at changing gender identity and/or sexual orientation of LGBTQ minors.

State Representative Khan has represented Newton in the Massachusetts House of Representatives since 1995. She was originally appointed by Speaker Robert DeLeo in 2009 to serve as the House Chair of the Joint Committee on Children, Families, and Persons with Disabilities, and has served in this capacity ever since.