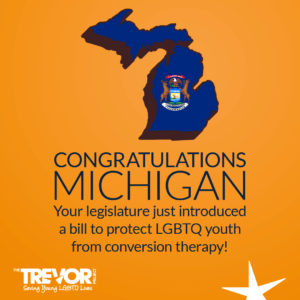 Michigan just took a major step in protecting LGBTQ youth by being one of the first states to introduce a bill this year to ban the dangerous and discredited practice of conversion therapy.

As the leading national organization providing crisis intervention and suicide prevention services for LGBTQ youth, The Trevor Project applauds the actions of Representative Adam Zemke of the 55th House District of Michigan House of Representatives for submitting House Bill 5550. The Trevor Project frequently receives calls of LGBTQ youth in crisis stemming from their experience with conversion therapy and aims to advocate for the eventual end of state sanctioned conversion therapy across the country via the 50 Bills 50 States campaign.

“No young person should ever be subjected to the horrors of conversion therapy” said Sam Brinton, Head of Advocacy and Government Affairs for The Trevor Project. “We are grateful for the work of Representative Zemke in taking an important step to bring this barbaric practice to an end in the state of Michigan. Churches like Metro City Church must understand that we should not be forced to change something we never chose.”

“It is wildly inappropriate to offer conversion therapy classes in our communities, and doing so is misrepresentative of our values as a welcoming state,” Zemke said. “I am proud to sponsor a bill to prohibit these practices in Michigan. Not only has scientific evidence overwhelmingly found that these approaches fail to accomplish their purported task, but they are also profoundly destructive and painful for the participating individual and his or her loved ones. It’s time to put an end to this terrible practice once and for all.”

If you would like to help The Trevor Project protect LGBTQ youth from the horrors of conversion therapy you can text TREVOR to 40649.

If you’d like to learn more about conversion therapy and the nationwide efforts to end it you can go to our 50 Bills 50 States campaign website: https://www.thetrevorproject.org/50-bills-50-states/.

You can also help support this important work by donating here: www.TheTrevorProject.org/give.