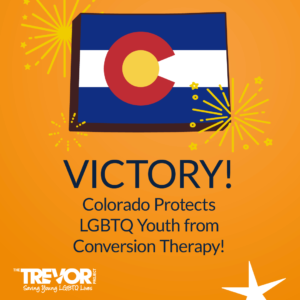 Denver, CO — In a historic day for Colorado and the nation, Governor Jared Polis — the country’s first openly gay governor — signed HB19-1039: Jude’s Law and HB19-1129: Prohibit Conversion Therapy for A Minor. These two pieces of legislation are vital to the health and safety of LGBTQ youth in Colorado. Versions of these bills were first introduced in 2015, and previously failed to receive hearings. This year, both bills passed with bipartisan support in both chambers.

Sponsored by the LGBT Caucus co-chairs Representative Daneya Esgar, D-Pueblo, and Senator Dominick Moreno, D-Commerce City, Jude’s Law will allow transgender Coloradans to more easily update the gender on their birth certificate, enabling them to have the identification documents that match who they are. Coloradans will be able to update their gender on their birth certificate to M, F, or X — without a surgery, a doctor’s note, or court order. This bill removes both the surgery requirement and court order requirement, allowing transgender people the ability to self-identify on their ID document. The bill removes the publication requirement for a name change in order to reflect one’s gender identity. A new birth certificate will be issued instead of an amended birth certificate when updating gender. Colorado is the third state in the country (including California and Oregon) to have non-binary gender options for both driver’s licenses and birth certificates.

Sponsored by Representatives Dafna Michaelson Jenet, D-Commerce City, and Daneya Esgar, D-Pueblo, and Senator Steve Fenberg, D-Boulder, HB19-1129 will ban a state-licensed mental health care provider from engaging in the discredited, harmful practice of conversion therapy on a patient under 18 years of age. Conversion therapy is the discredited and dangerous practice of attempting to change a person’s sexual orientation or gender identity. A physician or mental health care provider who violates this provision engages in unprofessional conduct under the applicable professional licensing board. Colorado will be the 18th state in the country to protect minors from conversion therapy.

“This was a historic session for LGBTQ Coloradans and their families. With legislation that impacts youth, transgender, and non-binary Coloradans, One Colorado championed bills for some of the most vulnerable in our community to improve the everyday lives of LGBTQ Coloradans. The strong bipartisan support of both of these bills further demonstrates that LGBTQ equality should be a nonpartisan issue, and we applaud the Republicans who stood with our community. Colorado will continue to make history as our country’s first openly gay Governor, Jared Polis, signs our pro-equality agenda into law to send a strong message that Colorado is a state that is open to all,” said Daniel Ramos, Executive Director of One Colorado.

“The Trevor Project is proud to stand with One Colorado and all of the amazing lawmakers and advocates in the Centennial State as they become the 18th state in the country to protect LGBTQ youth from the dangers of conversion therapy,” said Sam Brinton, Head of Advocacy and Government Affairs for The Trevor Project. “Watching the first openly LGBTQ governor in the nation sign this legislation is an especially humbling moment. Trevor will continue working across the nation until this horrible practice is relegated to the dustbin of history.”

The Trevor Project’s 50 Bills 50 States campaign has partnered with the Human Rights Campaign, National Center for Lesbian Rights, One Colorado, and GLAD, along with local advocates in support of these vital protections. People can sign up to join The Trevor Project’s effort to end conversion therapy by texting “TREVOR” to 40649.