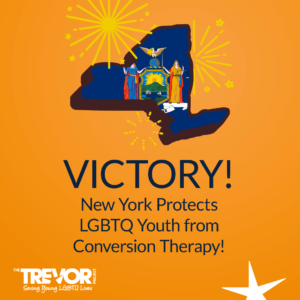 Albany, NY — New York today became the 15th state — and first state in this legislative session — to protect LGBTQ minors from receiving conversion therapy, the dangerous and ineffective practice that falsely claims to be able to change people’s sexual orientation and gender identity. Signed by Governor Andrew Cuomo this morning, the bills were introduced by Assemblymember Deborah Glick and Senator Brad Hoylman and quickly passed through the NY Assembly and NY Senate on January 15.

“Most Americans are shocked to learn that conversion therapy on minors is legal in any state, let alone New York,” said Amit Paley, CEO and Executive Director of The Trevor Project, the world’s largest suicide prevention and crisis intervention organization for LGBTQ youth. “We need to continue working with legislators in every state to make sure LGBTQ youth everywhere are protected from this form of torture, and today’s signing sends a clear message to young people that they are beautiful just the way they are.”

“We are grateful to Assemblymember Glick and Senator Hoylman for introducing this important legislation, and to Governor Cuomo for signing it into law — cementing New York’s place as a leader in LGBTQ equality,” said Sam Brinton, Head of Advocacy & Government Affairs for The Trevor Project. “We’re grateful for the governor’s efforts to end this harmful practice via regulation and now official legislation, sending a strong message to LGBTQ youth that they don’t need to fear being subjected to so-called ‘conversion therapy.’”

“It has been long been overdue for New York State to end the deplorable practice known as conversion therapy, especially given the escalation in attacks coming from this federal administration,” says Shijuade Kadree, Chief Advocacy Officer of The NYC Lesbian, Gay, Bisexual & Transgender Community Center. “We are thrilled that our state electeds have finally demonstrated that they will step up to protect its residents, ridding us of a medically-discredited practice that targets the most vulnerable – our youth – simply for being themselves. New York has shown that when our federal government fails to protect us, states have the power and promise to advance progressive laws that create affirming spaces for all.”