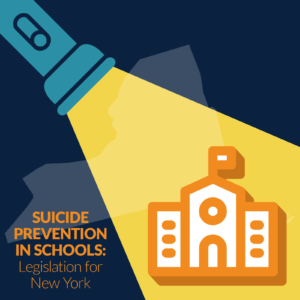 NEW YORK CITY—Assembly Member Joseph R. Lentol (D-North Brooklyn) and Senator Brad Hoylman (D/WF-Manhattan) announced today the introduction of the Student Suicide Prevention Act (Lentol- A9032/Hoylman- S7138). This new legislation would require school districts to adopt a comprehensive policy on student suicide prevention, intervention, and support for the bereaved in tragic cases when a student takes their own life. These policies would equip school staff and students with the tools necessary to assist students in crisis in grades 7–12 and prevent suicide. The legislation also calls for the implementation of policies that specifically address the needs of high-risk groups, such as LGBTQ youth, youth experiencing homelessness, and those with mental health concerns and disabilities.

“Schools play an important role in the well-being of our youth and are uniquely positioned to promote the health and safety of students. This is why our schools must have policies and procedures in place to help students in crisis and prevent the tragedy of suicide. We must do more to put an emphasis on mental health treatment and suicide prevention. The Student Suicide Prevention Act will help to save lives, especially those who are high-risk, including LGBTQ and homeless youth. I thank Senator Hoylman for sponsoring this measure in the Senate, and I am proud to work with The Trevor Project on this important issue that will help save lives,” said Assembly Member Joseph R. Lentol

“There’s a mental health crisis happening in our schools: in recent years, nearly 4,500 kids visited an emergency department in New York for self-harm. We have a solemn responsibility to help these students — especially the students in high-risk groups, like LGBTQ youth,” said Senator Hoylman. “Our schools need resources and contingency plans to address mental health so staff and students are able to help students in crisis and prevent the tragic loss of life. I’m honored to be working with my colleague Assembly Member Lentol on this important issue, and grateful to The Trevor Project for their advocacy on behalf of at-risk youth.

“More than one-third of New York school districts currently do not have a suicide prevention policy and only two percent of identified existing policies specifically address LGBTQ youth, who are at a higher risk of suicide attempt compared to their peers. In the last year alone, The Trevor Project responded to over 6,000 calls/chats/texts from LGBTQ youth in New York who reached out for support,” said Sam Brinton (they/them), Head of Advocacy and Government Affairs at The Trevor Project. “School districts that adopt a comprehensive suicide prevention policy will be taking the first step in ensuring that teachers, students, and parents alike have direct resources through their schools to help students in crisis and prevent suicide. Thank you to Senator Hoylman and Assembly Member Lentol for introducing this critical legislation that will save lives in New York.”

The CDC reports that in 2017 alone, 17.4% of high school students in New York State seriously considered suicide, and 10.1% made non-fatal suicide attempts. And according to a report by The Trevor Project, at least one-third of New York State schools currently do not have a suicide prevention policy and over 2 million youth in New York state are enrolled in schools that are not covered by LGBTQ inclusive suicide prevention policies.

Nationwide, suicide is the second-highest cause of death among youth ages 10–24. The rate of suicide in all age groups has continued to steadily rise in the last decade, and the rate of suicide among children ages 10–14 has doubled. According to The Trevor Project’s National Survey on LGBTQ Youth Mental Health, 39% of LGBTQ youth seriously considered attempting suicide in the past twelve months, with more than half of transgender and non-binary youth having seriously considered.

ABOUT THE TREVOR PROJECT: