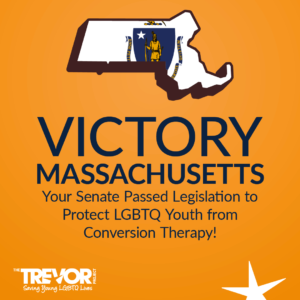 BOSTON, MA – State Representative Kay Khan (D-Newton) applauded her legislative colleagues in the Massachusetts Senate who passed the so-called “Conversion Therapy Ban Bill” by a vote of 34/0. H.140, An Act relative to abusive practices to change sexual orientation and gender identity in minors, was introduced in the House of Representatives by Representative Khan and successfully passed by a vote of 147/8, and co-sponsored by 116 state legislators, including members of both the House and Senate.

“As this bill’s lead sponsor, I thank Senate President Karen Spilka for pushing the Commonwealth of Massachusetts one step closer to banning state licensed conversion therapy, as we did in the House of Representatives two weeks ago under House Speaker Bob DeLeo’s leadership,” said Chairwoman Khan. “I am proud that I have persisted session after session in filing the Conversion Therapy Ban Bill and to be working with a broad coalition of over twenty statewide legal, mental health, child welfare, and LGBTQ organizations, as well as parents dedicated to promoting the well-being and safety of our children in Massachusetts. At the end of the day, this bill is about prohibiting discrimination in health care settings for youth in the LGBTQ community.”

Currently, state-licensed health providers are legally allowed to subject children, under the age of 18, to harmful and abusive conversion therapy practices to change sexual orientation or gender identity. Such practices include, but are not limited to, efforts to change behaviors or gender expressions, or to eliminate or reduce sexual or romantic attractions or feelings toward individuals of the same sex. Editor’s note: learn more about reporting on conversion therapy.

A 2018 study found that the rate of attempted suicide by LGBTQ youth whose parents tried to change their sexual orientation was more than double the rate of LGBTQ youth who reported no such attempts. For LGBTQ young people who reported both home-based efforts to change their sexual orientation by parents and efforts by therapists or religious leaders, the rate was three times higher. Organizations like The Trevor Project, the world’s largest suicide prevention and crisis intervention organization for LGBTQ youth, are invested in ending conversion therapy in every state.

“As the final legislative vote passes to protect LGBTQ youth from conversion therapy, it’s important to acknowledge that this bill will save numerous young lives in Massachusetts,” said Sam Brinton, Head of Advocacy and Government Affairs, The Trevor Project. “Life-saving policy leaders like State Representative Khan, the hundreds of Representatives and Senators in support of this bill, and the thousands of local advocates from The Trevor Project’s 50 Bills 50 States campaign should be proud of their unwavering support of LGBTQ young people and survivors of conversion therapy.”

“We are deeply grateful for the dogged advocacy of Representative Khan and the strong leadership support of Senator Julian Cyr and Senate President Karen Spilka in getting the bill through the Senate,” said Arline Isaacson, Co-Chair of the Coalition to Ban Conversion Therapy for Minors.

If enacted and signed by the Governor, Massachusetts will become the sixteenth state, along with Washington, D.C., to ban conversion therapy practices aimed at changing gender identity and/or sexual orientation of LGBTQ minors.

State Representative Khan has represented Newton in the Massachusetts House of Representatives since 1995. She was originally appointed by Speaker Robert DeLeo in 2009 to serve as the House Chair of the Joint Committee on Children, Families, and Persons with Disabilities, and has served in this capacity ever since.