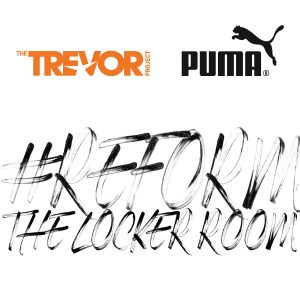 In the first year of its partnership with PUMA, The Trevor Project led a series of research-focused initiatives, including seven roundtable-style seminars, to identify how equal, safe, and affirming access to sports participation may benefit the mental health of LGBTQ youth athletes and prevent LGBTQ youth suicide. Informed by learnings from these initiatives, The Trevor Project is introducing a new curriculum overseen by subject matter experts that will encompass a virtual facilitated learning experience focusing on competency training in LGBTQ youth identity and suicide prevention. Called #REFORMTheLockerRoom, the initiative will also elevate Trevor’s crisis services to youth sports clubs, coaches, and sports professionals across the country.

“Participation in sports can help promote positive mental health outcomes among LGBTQ young people — that’s why it’s so important to implement LGBTQ-inclusive policies and practices in the locker room and on the field,” said Carrie Davis (she/her pronouns), Chief Community Officer of The Trevor Project. “LGBTQ youth are more than four times as likely to attempt suicide than their straight/cisgender peers, but those who report having at least one accepting adult are 40% less likely to report a suicide attempt. For many, that accepting person could be a coach or athletic director, so we want to empower adult-age sports leaders to become affirming mentors and help foster a welcoming environment for young LGBTQ athletes.”

The Trevor Project’s research found that sports participation was more common among LGBTQ youth who were less “out” about their LGBTQ identity, and that transgender and nonbinary youth reported significantly lower rates of participation than their cisgender LGBQ peers, regardless of outness.

Gleaned from the roundtable seminars, The Trevor Project’s initial qualitative and quantitative data suggests that participation in sports may benefit LGBTQ youth by: encouraging strong self-esteem; providing a sense of purpose; contributing to identity formation; advancing upward mobility through economic, academic, and social opportunities; promoting physical health; and offering peer support, community, and connection. All of these benefits may decrease risk factors for LGBTQ youth suicide, especially among transgender and nonbinary athletes, who face increased identity-based discrimination in athletic environments due to the gender-based separation of many team sports. Trevor’s Advocacy team is currently fighting back against more than 40 bills in 27 states that seek to ban transgender athletes from playing on school sports teams that correspond with their gender identity.

#REFORMTheLockerRoom aims to close participation gaps and ensure all LGBTQ youth can participate in sports as their authentic selves with the full support of coaches, athletic directors, and other sports leaders. Beginning this summer, the program will become available to select schools, state athletic associations, and organized leagues. The Trevor Project and PUMA are excited to announce The United Soccer League will be #REFROMTheLockerRoom’s first Community Partner.

“Since announcing our multiyear partnership with The Trevor Project last year, we have been inspired by the work the team has done to create a curriculum that will help break down barriers and create even more opportunities for LGBTQ youth who want to play and be part of the game,” said PUMA’s Global Director of Brand and Marketing Adam Petrick. “It’s exciting and encouraging to receive positive feedback about the program thus far from coaches, athletic departments and leagues, and sports leaders across the U.S., and we look forward to expanding the curriculum’s footprint over the next few years.”

To raise awareness about LGBTQ youth athlete mental health and promote inclusive play during Mental Health Awareness Month, PUMA is releasing a special-edition T-shirt on May 1, 2021, with 100% of proceeds (up to $15,000) benefiting The Trevor Project. The T-shirt will be available on PUMA.com.

“We’re huge believers in what PUMA and the Trevor Project are doing with #REFORMTheLockerRoom,” said USL Senior Vice President Lizzie Seedhouse. “There’s never been a more important time to step up and support LGBTQ+ athletes, as well as to listen, learn, and educate about inclusivity. We’re honored to be a part of it.”

Today, USL is releasing an in-depth video interview with Collin Martin – the only openly gay professional male soccer player in the U.S. — to talk about the intersection of athletics and inclusivity, as well as what leagues, clubs, supporters, and other community members can do to make the sport a safer, more inclusive space. The interview can be found on TRVR.org/Puma.

If you are a school administrator, coach, or similar youth-facing sports leader and want to get involved with #REFORMTheLockerRoom, visit TRVR.org/Puma.

For more information on The Trevor Project, visit TheTrevorProject.org.