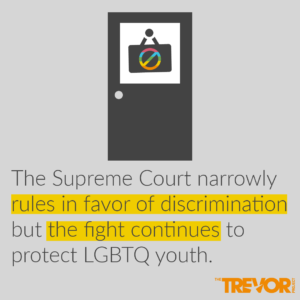 The Trevor Project released the below statement today from Amit Paley, CEO and Executive Director of The Trevor Project, regarding the Supreme Court’s decision in the Masterpiece Cakeshop case.

“The Trevor Project is disappointed by the Supreme Court’s decision today in the Masterpiece Cakeshop case, but the narrow ruling does not change the fact that discrimination against LGBTQ people—and LGBTQ youth in particular—is wrong and un-American. While this ruling applies only to this particular case, the court also recognized that states can seek to prevent the harms of discrimination in the marketplace, including against LGBTQ people.

LGBTQ adults and youth should be able to live their lives freely and proudly, without discrimination. When business open their doors to the public, they should be open to all, regardless of their sexual orientation or gender identity.

We need to let LGBTQ youth know that when they are in crisis they can always reach out for help and support. Discrimination and rejection of LGBTQ youth can have negative impacts on their mental health. We know that youth from highly rejecting families are 8 times more likely to attempt suicide than youth from accepting families. Lesbian, gay, and bisexual youth are five times more likely to attempt suicide than their straight peers. And research has shown that more than 40% of transgender people have attempted suicide with over 90% of those attempts occurring when the transgender individual is younger than 25 years old.

We at The Trevor Project want every young person in this country to know that they are beautiful the way they are and that they are not alone. Any LGBTQ person who needs support or someone to talk to can reach out to us 24/7 at 1-866-488-7386 and find more digital support and resources at https://www.thetrevorproject.org/gethelp.

We also want to make clear that you can be LGBTQ and a person of faith. We call on faith communities across the country to remind LGBTQ youth that they are not alone, and they should feel welcome and affirmed to join them in practicing their faith.”