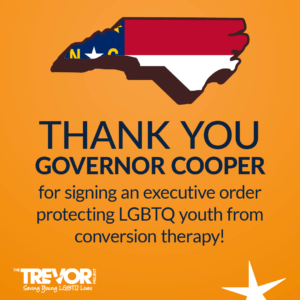 Raleigh, NC — Today Governor Roy Cooper issued an executive order directing the North Carolina Department of Health and Human Services to prohibit any use of state or federal funds to pay for conversion therapy practiced on minors by any health care provider. Conversion therapy is the discredited and dangerous practice of attempting to change a person’s sexual orientation or gender identity. This important executive order sends a clear message that taxpayer dollars meant for medical and mental health care should be used only to provide evidence-based medical services, not harmful and ineffective practices like conversion therapy, which has been rejected by every major medical and mental health organization in America.

“The Trevor Project commends Governor Cooper for taking decisive action to highlight the dangers of conversion therapy. While his executive order is a great first step in protecting North Carolinian youth, we must continue to push for comprehensive  protections,” said Sam Brinton, Head of Advocacy and Government Affairs for The Trevor Project. “To that end, we call upon the North Carolina state legislature to take up legislation to stop licensed practitioners from violating the ethical guidelines of their profession, and harming the most vulnerable youth in the Tar Heel State.”

“This year our campaign ignited a conversation among North Carolinians about the importance of protecting our kids from ‘conversion therapy.’ It’s gratifying to see Governor Cooper take this critical step in the right direction. No child should be told that they must change their sexual orientation or gender identity; we’re grateful that Gov. Cooper agrees. We are committed to ending this debunked practice and will work for statewide protections,” said Kendra R. Johnson, Executive Director of Equality NC.

The Trevor Project, the world’s largest suicide prevention and crisis intervention organization for LGBTQ youth, recently released the results of its inaugural 2019 National Survey on LGBTQ Mental Health, including insights around conversion therapy. The cross-sectional national survey of LGBTQ youth across the United States found that:

The Trevor Project’s 50 Bills 50 States campaign has partnered with the Human Rights Campaign, National Center for Lesbian Rights, Equality North Carolina, Campaign for Southern Equality, and GLAD, along with local advocates in support of these vital protections. People can sign up to join The Trevor Project’s effort to end conversion therapy by texting “TREVOR” to 40649.