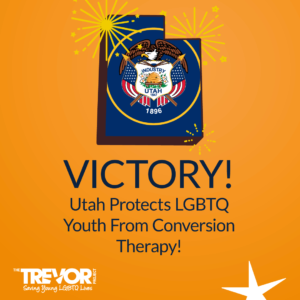 The new licensing rule protecting Utah youth from conversion therapy went into effect last night, after being announced by Governor Herbert in November.

“The Trevor Project commends the State of Utah for taking bold action to protect thousands of LGBTQ young people in Utah from the discredited practice of conversion therapy. This is historic progress and further proof that protecting youth from this danger transcends regional or political divides,” said Casey Pick, Senior Fellow for Advocacy and Government Affairs at The Trevor Project. “According to our national survey, five percent of LGBTQ youth reported being subjected to conversion therapy, and of those five percent, 42 percent reported a suicide attempt in the past year, more than twice the rate of their peers who did not report experiencing conversion therapy. Thank you to our friends at Equality Utah and all the local activists who tirelessly advocated for these protections that will work to save young LGBTQ lives in Utah.”

The Trevor Project’s 50 Bills 50 States campaign has partnered with the Human Rights Campaign, NCLR’s Born Perfect campaign, and Equality Utah, along with local advocates in support of these vital protections.