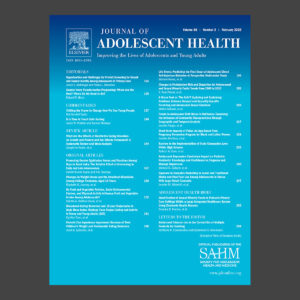 The study, published in the Journal of Adolescent Health, finds that transgender and nonbinary youth are particularly vulnerable to poor mental health outcomes and suicide risk

TODAY, May 20th, The Trevor Project announced that its research team has published a new peer-reviewed article titled “Understanding the Mental Health of Transgender and Nonbinary Youth” in the Journal of Adolescent Health (JAH). The study will be included in the medical journal’s June 2020 “Pride” issue but is available online now.

“Prior to this study, there was a clear lack of research on the differences in mental health and suicidality within different sub-groups of LGBTQ youth. These results underscore that transgender and nonbinary youth are particularly vulnerable to poor mental health outcomes and suicide risk compared to their cisgender peers within the LGBTQ community. Furthermore, they show how LGBTQ-based discrimination and victimization contribute to these increased mental health disparities,” said Amy E. Green, Ph.D. (she/her pronouns), Director of Research at The Trevor Project.

“At The Trevor Project, we hear from trans youth in crisis every day and we understand the detrimental impacts discrimination and harassment can have on their mental health and well-being. We hope this data will encourage more robust nationwide data collection on LGBTQ youth mental health, and that policymakers and health care providers will use these insights to create policies and safe spaces that protect and affirm trans youth everywhere,” said Myeshia Price-Feeney, Ph.D. (she/her pronouns), Research Scientist at The Trevor Project.

These findings point to the need to directly address the unique challenges of transgender and nonbinary youth in prevention and intervention programs and to advance policies that reduce discrimination and victimization based on sexual orientation or gender identity.