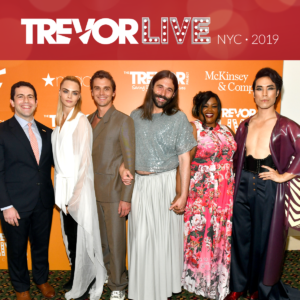 Highlights from the event included:

Who am I?
Who am I trying to be?
Not myself
Anyone but myself
Living in a fantasy to bury the reality
Making myself the mystery
A strong facade disguising the misery
Empty beyond the point of emptiness
Full to the brim of fake confidence
A guard that will never be broken
Because I broke a long time ago
I am hurting but don’t tell anyone
No one needs to know
Don’t show or you’ve failed
Always okay, always fine
Always on show
The show must go on
It will never stop
The show must not go on
But I know It will
I give up
I give up giving up
I am lost
I am raw
I don’t need to be saved, I need to be found.

Credit: Getty on behalf of The Trevor Project