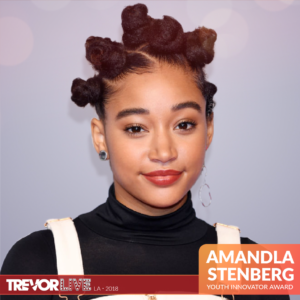 LOS ANGELES (Nov. 20, 2018) – The Trevor Project will honor Amandla Stenberg with the Youth Innovator Award and AT&T Mobility & Entertainment President David Christopher with the 20/20 Visionary Award for their commitment to supporting the nonprofit’s mission to provide crisis intervention services and end suicide among gay, lesbian, bisexual, transgender, queer and questioning young people. The honors will be presented at TrevorLIVE Los Angeles, hosted by Eugene Lee Yang on Dec. 2 at The Beverly Hilton, with a special appearance by “Superstore” actors Nico Santos and Lauren Ash during the program. It was previously announced that Ryan Murphy and the cast of “POSE” will also be honored.

“We’re excited to honor Amandla for consistently using their platform to advocate for LGBTQ young people, and AT&T for its long history of supporting the LGBTQ community and Trevor’s crisis services,” said Amit Paley, CEO and Executive Director of The Trevor Project. “Led by Eugene, who dedicates his time and work to improving the lives of LGBTQ people everywhere, the evening is sure to be a fun and memorable celebration of The Trevor Project’s life-saving work on our milestone 20th anniversary.”

Stenberg can currently be seen in 20th Century Fox’s influential film “The Hate U Give” which premiered this year at the Toronto International Film Festival. Additionally, they were recently seen in Amma Asante’s WWII drama “Where Hands Touch,” which also premiered at TIFF. In October 2018 they appeared on the cover of Time Magazine as a Next Generation Leader and has been recognized globally for their crusade towards sparking thoughtful conversation using social media as a platform to spread awareness and knowledge on topics such as cultural appropriation, intersectional feminism, mindfulness, biracial identity, sexual identity, gender and beauty standards to name few. They have been recognized with Teen Choice Awards, a BET Award and NAACP Image Award for their work.

“I’m so profoundly honored to be recognized by The Trevor Project, an organization I admire and whose work is so critical,” said Stenberg. “Now, more than ever, it’s crucial that LGBTQ youth have a safe space where they can find a sense of being when they feel lost or alone.”

Christopher, President of Mobility & Entertainment, will accept the 20/20 Visionary Award on behalf of AT&T. AT&T’s commitment to The Trevor Project, and other socially conscientious initiatives, is the latest in its exceptional history of supporting the LGBTQ community. In 1975, AT&T was one of the very first American companies to prohibit discrimination against employees based on sexual orientation. In 1998, they adopted one of the very first domestic partner benefits programs for LGBTQ employees. And in 2006 AT&T was one of the first companies to offer transgender-inclusive health care benefits. Supporting the LGBTQ community is an enduring priority at AT&T, continuously working to identify ways to advocate and foster inclusivity.

“I’m proud to accept this award on behalf of AT&T,” said Christopher. “At AT&T, we strongly believe in equality for all and The Trevor Project’s life-saving work. Together we’ve been able to do something meaningful by expanding support for at-risk LGBTQ youth. As more and more of us join together in support of The Trevor Project, we will continue to truly make a difference.”

Hosting duties for TrevorLIVE Los Angeles will be fulfilled by Yang, one of the co-creators of The Try Guys. Santos and Ash from the NBC series “Superstore” will make a special appearance during the program.

Yang can next be seen opposite Andy Samberg in “Brooklyn 99,” and recently wrapped shooting on the indie “Spring Bloom” opposite Jake McDorman and Nora Zehetner. Eugene was also recently part of the Logo30, Logo’s inaugural list of extraordinary LGBTQ+ people for 2018, and was included amongst the first inductees of Gold House’s A100 list, which is comprised of the top 100 most influential Asian-Americans over the past year. In digital, Yang is well-known for his contributions as one of the creators of The Try Guys, who recently launched their own YouTube channel and production company. As a writer, director, producer, and actor; Eugene has reached billions of viewers worldwide, making him one of today’s most recognizable young Asian-American faces online and in social media.

With a combination of his sarcastic wit, outrageous sensibility, and snarky commentary, Santos has the rare ability to charm every audience he encounters. Santos was most recently seen in Warner Brother’s “Crazy Rich Asians” alongside an all-Asian cast including Constance Wu, Henry Golding and Ken Jeong. The film instantly became a cultural phenomenon, as well the highest-grossing romantic comedy in the past decade.

Ash is currently the voice of Scorpia in “She-Ra and the Princess of Power”. She has earned six wins throughout the past 10 years in various categories at the Canadian Comedy Awards, including the Canadian Comedy Person of the Year. This year, she was nominated for an ACTRA Award (Canada’s SAG Awards) for her performance in the film “Dirty Singles” and was the winner of a Canadian Screen Award (Canada’s Emmys) for a guest-starring role on the CTV sitcom Spun Out.

The event’s star-studded red carpet and full awards show will be streamed live on The Trevor Project’s Facebook, Twitter, and YouTube, powered by Revry, the first queer global streaming network. TrevorLIVE LA will launch the two-year partnership, which names Revry the exclusive live streaming partner and the Official Streaming Network of TrevorLIVE LA and NY.