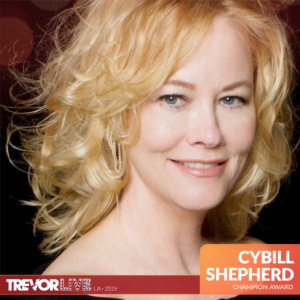 LOS ANGELES — The Trevor Project, the world’s largest suicide prevention and crisis intervention organization for LGBTQ young people, today announced Cybill Shepherd as the 2019 recipient of the “Champion Award,” which recognizes the outstanding support of an ally and their commitment to supporting The Trevor Project’s mission. The PwC Charitable Foundation, Inc. will be the recipient of the “20/20 Visionary Award,” presented to corporations supporting LGBTQ inclusion around the world. Both will be honored at the TrevorLIVE LA fundraising gala, Nov. 17, at the Beverly Hilton in Los Angeles.

“Cybill Shepherd and the PwC Charitable Foundation consistently make a positive impact on the lives of LGBTQ people across the country, and we’re excited to honor their commitment to The Trevor Project and LGBTQ young people,” said Amit Paley, CEO and Executive Director of The Trevor Project. “With Zazie and Sasheer’s upbeat energy leading us through a moving night, we look forward to celebrating 21 years of life-saving work at TrevorLIVE Los Angeles.”

Shepherd is the Golden Globe-winning actress and long-time ally and activist of LGBTQ rights known for her role as Phyllis Kroll in the critically acclaimed Showtime lesbian drama “The L Word.” The show’s groundbreaking content exposed millions to multi-dimensional queer characters with colorful storylines, driving what is often seen as the first major representation of lesbians on mainstream television. Shepherd’s daughter, Clementine Ford, will continue her mother’s legacy as a star in the forthcoming sequel series “The L Word: Generation Q.”

“For many young people in crisis, the affirming work of The Trevor Project can mean the world. In my work as an entertainer and activist – and especially as a mother, I’ve seen the profound freedom that comes with giving someone permission to be themselves,” said Cybill Shepherd. “I’m incredibly humbled to accept the ‘Champion Award’ at TrevorLIVE LA; and will continue to stand in solidarity with the LGBTQ community as an ally fighting for a more inclusive place for the next generation.”

PwC Charitable Foundation, a public charity that invests in emerging solutions to society’s greatest challenges in education and humanitarianism; has a history of supporting underrepresented populations and underserved communities, including The Trevor Project and its life-saving work.

“I was elected president of the PwC Foundation this month and could not be more proud of the organization’s support for The Trevor Project,” said Yolanda Seals-Coffield, president of the PwC Foundation, who will accept the ‘20/20 Visionary Award’ along with Shannon Schuyler, chief purpose & inclusion officer for PwC US. “The Trevor Project is the world’s largest organization providing crisis intervention and suicide prevention services for LGBTQ young people — an important mission that is aligned with the PwC Foundation’s values to support support inclusiveness and belonging, especially among underserved groups.”

The proud presenting sponsors of this year’s TrevorLIVE LA are the PwC Charitable Foundation, Inc. and Abercrombie & Fitch. In addition, Kimpton Hotels and Restaurants serves as the official hotel partner; and AT&T is the official VIP Reception Sponsor.

TrevorLIVE  is the signature  annual fundraising event  of The Trevor Project.This  annual event brings together top entertainers and corporate leaders to support the organization’s life-saving initiatives. Learn more about TrevorLIVE at http://la.trevorlive.org.