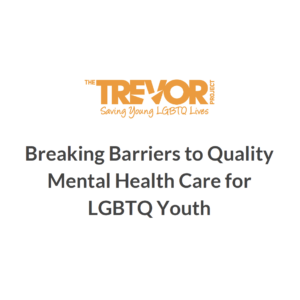 NEW YORK, NY — Today, The Trevor Project, the world’s largest suicide prevention and crisis intervention organization for lesbian, gay, bisexual, transgender, queer & questioning (LGBTQ) young people, released new research that highlights the prevalence of unmet mental health care needs among LGBTQ youth, a population that has been found to be at significantly increased risk for depression, anxiety, and suicide. The report, “Breaking Barriers to Quality Mental Health Care for LGBTQ Youth,” details the numerous barriers LGBTQ youth face when trying to access mental health care and how those barriers operate within and across intersecting social identities. Overall, more than half (54%) of LGBTQ youth who reported wanting mental health care in the past year did not receive it.

The most commonly endorsed barrier was the inability to afford care (53%). LGBTQ-specific barriers included concerns around being outed (22%), not having their LGBTQ identity understood (20%) or overly focusing on their LGBTQ identity (16%), and not finding a provider who was LGBTQ (11%). Youth-specific concerns relating to not wanting to get parental permission (36%) and having parents who refused to allow care (16%) were also endorsed by LGBTQ youth. Additional barriers endorsed by LGBTQ youth include previous negative experiences (22%) as well as transportation concerns, such as having no way to get to the location (20%) or having the location be too far away (10%). See a graph with all of these barriers here.

“Given the disproportionately higher rates of mental health challenges and suicide attempts reported by LGBTQ youth, any barriers to mental health care can have enormous consequences. We must act now to break down these barriers to save lives,” said Dr. Amy E. Green, Director of Research for The Trevor Project. “Establishing a mental health care system that is equitable, effective, and available for all will not be easy. It will require major investment in public-funded programs and a wide variety of policy changes aimed at expanding access, improving the cultural competency of providers, and eliminating structural barriers. And from the top down, we must all work together to actively confront mental health stigma and reduce fears around asking for help.”

Dr. Green added, “COVID-19 has highlighted vast disparities that exist within the U.S. mental health care system, while also demonstrating that mental health care can be effectively provided via telephone or video conferencing when necessary. The advancements in telehealth services prompted by the pandemic have expanded the ability for those in need to receive care and should be adopted and expanded upon long term.

The white paper uses new data from the organization’s 2020 National Survey on LGBTQ Youth Mental Health, in which a diverse national sample of more than 40,000 LGBTQ youth between the ages of 13–24 in the United States was surveyed. The report in its entirety can be found online.