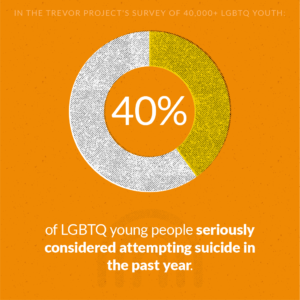 NEW YORK — The Trevor Project today released the results of its 2020 National Survey on LGBTQ Youth Mental Health. The second annual survey found that 40% of respondents seriously considered attempting suicide in the past twelve months, with more than half of transgender and nonbinary youth having seriously considered it, highlighting the urgent need for LGBTQ-inclusive policies, programs, and practices. The study comes at a critical time as the country grapples with the implications of the COVID-19 pandemic and national demonstrations around systemic racism and violence – both of which disproportionately impact the mental and physical health of Black LGBTQ people.

The largest-ever of its kind, this survey represents the experiences of over 40,000 LGBTQ youth and provides crucial data around mental health disparities, discrimination, housing instability, barriers to accessing mental health care, conversion therapy, and suicide. Survey data also highlight the positive impact safe spaces and social support have on the well-being of LGBTQ youth.

The study reveals that the majority of respondents experienced symptoms of generalized anxiety disorder and major depressive disorder (68% and 55%, respectively), while 48% reported engaging in self-harm in the past twelve months, including over 60% of transgender and nonbinary youth. Yet, nearly half of those who wanted mental health care were not able to receive it.

“For years, suicide has been the second leading cause of death among young people in the U.S., but we still do not fully grasp the disproportionate impact it has on LGBTQ young people because of insufficient national data collection. This survey — the largest ever conducted on LGBTQ youth mental health — provides critical insights into the lives of LGBTQ youth and risk factors for suicide,” said Amit Paley, CEO & Executive Director, The Trevor Project. “We strongly urge public health officials and policymakers to make significant investments in mental health research and support programs that take an intersectional approach to meet the unique needs of diverse communities across the country. We know that a one-size-fits-all approach to suicide prevention does not work; the need for robust research, systematic data collection, and comprehensive mental health support has never been greater.”

Survey results also demonstrated that when support systems are in place, LGBTQ youth report significantly lower rates of attempting suicide. Systems of support include a supportive person, LGBTQ-affirming spaces, proper use of pronouns, and access to gender-affirming tools. Transgender and nonbinary youth who reported having their pronouns respected by all or most of the people in their lives attempted suicide at half the rate of those who did not have their pronouns respected.

“Given limited research findings about LGBTQ youth, this survey is an essential resource to shine a light on the disproportionate needs of the community and inform our collective response to better support these youth,” said Dr. Amy Green, Director of Research, The Trevor Project. “We have found, now year over year, that greater levels of support and acceptance is associated with dramatically lower rates of attempting suicide. This includes the powerful role of gender-affirming care and support for transgender and nonbinary youth. The data serve as a clarion call for us to prioritize affirming systems of support for LGBTQ youth that will benefit society for years to come.”

The survey findings carry significant policy implications for LGBTQ youth. Currently, 30 states still do not have laws protecting minors from the dangers of conversion therapy. The study found that 10% of LGBTQ youth reported undergoing conversion therapy, with 78% reporting it occurred when they were under age 18. According to the survey, those who experienced conversion therapy attempted suicide at more than twice the rate as those who did not.

“LGBTQ youth are incredibly resilient and face a unique set of challenges every day simply because of who they are,” added Paley. “By expanding systematic data collection to understand these challenges, we can better identify and implement effective systems of care and policies that will improve mental health and ultimately save lives. This is exactly why The Trevor Project exists.”

Additional findings from the survey include:

Those who faced discrimination or physical harm due to their sexual orientation or gender identity were more likely to attempt suicide.

Access to mental health care is a crucial barrier

The majority of the surveyed LGBTQ youth reported recent symptoms of anxiety disorder, major depressive disorder or engaged in self-harm, yet nearly half of respondents could not access the mental health care they desired

Support systems work to save lives

LGBTQ allies, including educators and celebrities, can positively impact how youth feel about being LGBTQ

The content and methodology for The Trevor Project’s 2020 National Survey on LGBTQ Youth Mental Health were approved by an independent Institutional Review Board.

This quantitative cross-sectional survey was conducted using an online platform between December 2, 2019 and March 31, 2020 among 40,000+ respondents aged 13-24 who reside in the United States. Respondents were defined as being LGBTQ if they identified with a sexual orientation other than straight/heterosexual, a gender identity other than cisgender, or both. This report uses “transgender and nonbinary” as an umbrella term to encompass a wide variety of gender identities. For additional information on methodology such as sample description and comparability, filters and exclusions, question development, and more please visit https://www.thetrevorproject.org/survey-2020/.