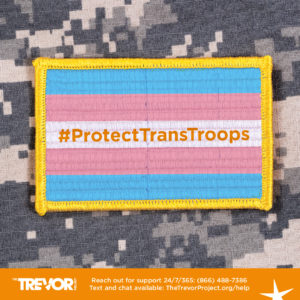 The Trevor Project, the nation’s largest and only accredited suicide prevention and crisis intervention organization for LGBTQ youth, responds to the Administration’s renewed call for a ban on transgender individuals serving in the military. The following statement is from Trevor Project CEO and Executive Director Amit Paley.

“We know these policies have real consequences. Typically The Trevor Project gets around 7% of our daily calls from young people who identify as transgender, but last August, when the Administration first announced this ban, that amount rose to nearly 18%.

“We will always fight for the safety of LGBTQ young people. In response to the last ban on transgender service members, The Trevor Project filed amicus briefs in nearly every case, and our amicus brief was cited as a pivotal factor in the previous court decision of the case, with three such citations in Doe v Trump alone.”

The Trevor Project is here 24/7/365 for transgender service members, and anyone else in the community who needs someone to talk to. Call our 24/7 lifeline at 1-866-488-7386. Text and chat counseling is available from 3-10pm EST every day at www.thetrevorproject.org/help.