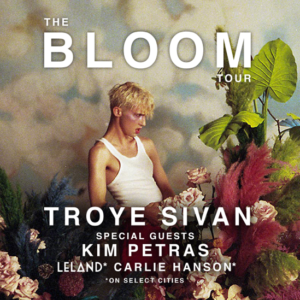 LOS ANGELES, CA — This fall on the Bloom Tour, Troye Sivan is using his platform to empower LGBTQ youth by partnering with The Ally Coalition and volunteers on every tour stop. The venture will connect his fans with national and local groups creating a safer, healthier world for LGBTQ young people. The Ally Coalition is a non-profit founded by Jack and Rachel Antonoff in 2013 to advance equality for queer youth.

Troye and The Ally Coalition have tapped The Trevor Project as the Bloom Tour’s national partner. The Trevor Project is the world’s largest suicide prevention and crisis intervention organization providing free and confidential direct services to LGBTQ youth 24/7.  On the local level, the Bloom Tour will collaborate with organizations in every city that provide essential services to LGBTQ youth, highlighting ways they can get involved in their work and use their services.

The Ally Coalition will be offering the chance for Troye Sivan fans to volunteer throughout the tour. All fans who take action in support of LGBTQ equality onsite at each show will be entered to win a prize. Those interested in volunteering can sign up here:  http://bit.ly/Volunteer4Troye

Fans can stay up-to-date on The Ally Coalition’s work from the road when they take over Troye’s Tumblr during the Bloom Tour.  Tune in at http://troyesivan.tumblr.com/ once the tour kicks off on September 21 for nightly updates.

Tickets for the tour are currently on sale to the general public at LiveNation.com and TroyeSivan.com. His new album Bloom will be released by Capitol Records on August 31.  For Troye Sivan publicity materials please visit: http://www.umgb2b.com.

*not a Live Nation show