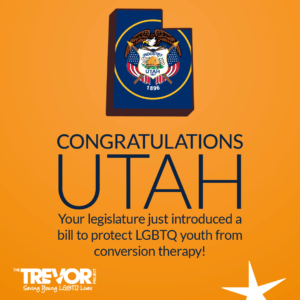 Salt Lake City, UT — State Senator Daniel McCay and Representative Craig Hall, both Republicans, today introduced Utah’s first-ever bill to protect LGBTQ youth from conversion therapy, which falsely claims to be able to change a person’s sexual orientation or gender identity. With the “Prohibition of the Practice of Conversion Therapy Upon Minors” Act, Utah becomes the 37th state to introduce such legislation.

Sponsor Craig Hall said, “I’m proud to sponsor legislation that protects children from the harmful and discredited practice of so-called conversion therapy. This legislation establishes regulatory standards and will have a positive impact on the mental health and wellbeing of LGBTQ youth.”

“We at The Trevor Project are grateful for the tremendous leadership shown by Senator McCay, Representative Hall, and the countless local LGBTQ advocates who have worked together to introduce strong protections from conversion therapy for Utah’s youth,” said Sam Brinton, Head of Advocacy and Government Affairs for The Trevor Project. “The introduction of this bill is a great accomplishment, and sends a powerful message that people in every state and political party can find common ground around protecting LGBTQ youth from this dangerous and discredited practice. The Trevor Project hears from Utahns in crisis every day. This legislation will save lives, and The Trevor Project is committed to seeing it pass.”

“For decades, LGBTQ Utahns have been subjected to the harmful and fraudulent efforts of conversion therapy, and it’s sadly still happening,” said Equality Utah executive director Troy Williams. “We still meet young people who are being told they can change their sexual orientation or gender identity, and the impacts are devastating. We are grateful to Representative Hall and Senator McCay for sponsoring this bill to protect our youth.”

“This bill is a huge step forward for LGBTQ children and families,” said Clifford Rosky, a law professor at the University of Utah and a member of Equality Utah’s Advisory Council.  “Conversion therapy harms children and destroys families. It’s time for Utah to join other states in ending this dangerous, discredited practice.”

The Trevor Project’s 50 Bills 50 States campaign works to support legislation like the “Prohibition of the Practice of Conversion Therapy Upon Minors” Act to protect LGBTQ people from conversion therapy in every state. 50 Bills 50 States is the largest grassroots campaign in the world endeavoring to protect LGBTQ youth from this dangerous and discredited practice. The organization partners with mental health associations, youth organizations, LGBTQ groups, student clubs, faith communities, and educational institutions in every state by sharing stories, mobilizing volunteers, and informing policymakers to promote the submission and passage of powerful legislation. People can sign up to join The Trevor Project’s effort to end conversion therapy by texting “TREVOR” to 40649.