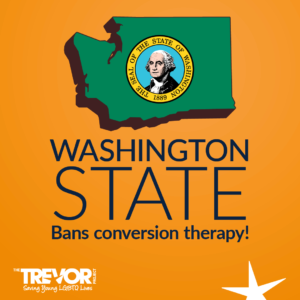 This week the state of Washington made history, becoming the first state in 2018, and the 10th state in total, to pass protections for LGBTQ youth from the barbaric practice of conversion therapy. Conversion therapists falsely claim be able to change LGBTQ youth into straight and cisgender youth. Prominent professional health associations—including the American Medical Association, the American Psychological Association, and the American Academy of Pediatrics, among numerous others—oppose the use of conversion therapy on youth, calling the practice harmful and ineffective.

As the leading national organization providing crisis intervention and suicide prevention services for LGBTQ youth, The Trevor Project is invested in ending conversion therapy in every state and was proud to submit testimony with our partners such as Equal Rights Washington on the critical need to protect LGBTQ youth from conversion therapy. The Trevor Project’s 50 Bills in 50 States campaign works to introduce legislation to ban the practice in every state in the country.

“Washington has been leading by example. So far bills have been introduced in 34 states, passed in over 30 cities, and nearing passage in states from coast to coast” said Sam Brinton, Head of Advocacy and Government Affairs for The Trevor Project. They continued “Every week, we celebrate as another local ordinance like the City of Milwaukee or piece of state legislation like the State of Maryland moves closer to protecting LGBTQ youth from conversion therapy.”

There is a lot of work to do. New research by The Williams Institute shows that there are an estimated 20,000 LGBT youth in the U.S. ages 13 to 17 who will receive conversion therapy from a licensed health care professional before the age of 18. Also, approximately 57,000 youth will undergo the treatment from a religious or spiritual advisor. Researchers also found that approximately 698,000 LGBT adults in the U.S have received conversion therapy at some point in their lives, including about 350,000 who received it as adolescents.

“So-called ‘conversion therapy’ is dangerous and should be banned everywhere. We are thankful that politicians on both sides of the aisle in Washington States have joined together to protect LGBTQ youth,” said Amit Paley, The Trevor Project’s CEO and Executive Director. “This victory is part of a growing movement to stop conversion across the country and we won’t rest until conversion therapy is banned in all 50 states.”

“Banning conversion therapy sends a loud and unequivocal message to LGBTQ youth: there is nothing wrong with you. As a community, we love and support every person and we celebrate the diversity that makes us stronger.I am proud that Washington is standing up for our queer youth and I look forward to the day that these monstrous practices are illegal in every state,” said  Sen. Marko Liias, lead sponsor of this critical legislation.

“As a mother of a teenage son I am grateful for the steps Governor Inslee takes today to protect the LGBTQ youth in our state. A dear friend experienced conversion therapy. My heart aches for them and the pain they endured.” said Amanda Williams, a local activist working with the Trevor Project and the 50 Bills 50 States campaign. She continued, “Parenting is the hardest, best thing I’ve ever done. Everyday we’re confronted with confusing, conflicting advice. Every day we do our best to make the best choices for our kids. Thank you for taking a dangerous, destructive choice off the table for some of our most vulnerable children.”