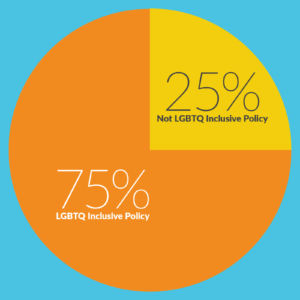 School policies are an important part of suicide prevention, especially because of the amount of time young people spend at school. Released today, The Trevor Project’s new report shows that implementing legislation like California Assembly Bill 2246, which requires schools serving grades 7–12 to establish student suicide prevention policies, dramatically increases the number of policies that address the needs of high-risk populations including LGBTQ youth.

It is vital that all California policies be updated to comply with AB 2246, because studies show that lesbian, gay, and bisexual youth are more than four times more likely to attempt suicide than their straight peers, and nearly half of all trans people have made a suicide attempt — many before the age of 25. A third of all lesbian, gay, and bisexual youth are bullied at school, and almost half of them seriously consider attempting suicide, almost 4 times more likely than their straight peers.