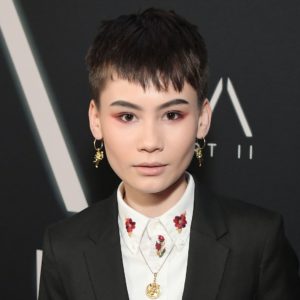 Ian Alexander is best known for his role of Buck Vu on The OA, a drama with science fiction and fantasy elements streaming on Netflix. With 90k followers on Instagram and an appearance on Ellen already under his belt at the age of 18, it’s safe to say that Alexander is a public figure, especially for LGBTQ young people who avidly watch his adventures on social media.

It was on social media that Alexander first began to question his gender identity. “I was watching this video on YouTube about starting testosterone and top surgery and all this stuff, and I didn’t really make the connection about why I was so intrigued about these videos,” he said on Ellen. “It wasn’t until I was 13 and met trans people for the first time and I thought, wait, you’re allowed to do that? You’re allowed to change your pronouns and your name?”

Alexander’s background is in acting. It was on The OA, he said, that he first heard his correct pronouns regularly used, something he hadn’t experienced before. But while acting was a unique path, Alexander’s road to finding himself looks a lot like many other LGBTQ young people’s journeys, with highs, lows, and struggles with identity that have shaped how he sees himself and his relationship with the world around him. “I’m an actor, so my life is always sort of spontaneous,” he told me. “I graduated high school last year, and now I’m kind of all over the place.”

Alexander was born in Salt Lake City to a Mormon family. His mother is Vietnamese American, and she met Alexander’s father in Salt Lake City. Alexander’s father’s job took the family to Hawaii six weeks after Alexander was born. “I lived on Oahu for the first six years of my life, and then we moved to the greater Tokyo area in Japan,” he said. “It was great to have a lot of different cultural experiences growing up.”

These experiences, though, weren’t always easy to reconcile, as Alexander shared in a recent conversation on MTV’s Sound On series. “Being biracial is a huge part of my identity that I don’t want to erase,” he said. “I’ve gotten a lot of DMs saying, ‘I’m half Vietnamese too!’ People just get really excited to see themselves represented in the media.”

Representing people in media and being so visible has drawbacks, however. “It’s nerve-wracking to be so publicly vulnerable,” he said. “I think it’s important to be honest about my past and what I’m going through so people in similar situations can feel less alone. It’s definitely scary though, putting myself out there and not knowing what people will say to me. Some people are just ruthless online.”

Alexander also said that he has gone through struggles with his mental health, something many LGBTQ youth also report at disproportionate rates. The Trevor Project gets calls, chats, and texts from young people in crisis every day, many of them who have a similar story to Alexander’s.

“I’ve struggled with depression and anxiety for many years and I’ve struggled with suicidal ideation in the past,” he said. “Trans youth are particularly at risk for suicide when adults in their lives are unaccepting of who they are, which was something I had to endure after coming out as trans at 13.”

But he did endure it, and today he has an important message for LGBTQ youth everywhere. He recently marked one month on testosterone, putting him on a similar path to the visible social media figures who once guided him to his identity. “I hope that I can be an example to other people going through a really difficult time that you can push through it and reach a place where you are thriving and succeeding in life,” he said.

He’s also familiar with The Trevor Project. “I actually used the online chat feature to receive counseling at a few points throughout my high school career,” he said. “I think it’s crucial to provide support and mental health resources to LGBTQ youth. The Trevor Project is saving lives and protecting the livelihood of our community.”

Asked what he would say to an LGBTQ young person who wasn’t in a great place, Ian spoke about coming together. “No matter what anyone says or does to you, there will always be a whole community of us who are here to love, accept, and support you,” he said. “There’s a whole bright future ahead of us, and we’re gonna work together to fight for the happiness we deserve.”

If you or someone you know is feeling hopeless or suicidal, contact The Trevor Project’s TrevorLifeline 24/7 at 1-866-488-7386. Counseling is also available 24/7 via chat every day at TheTrevorProject.org/Help, or by texting 678-678.

Photo of Ian by Charley Gallay/Getty Images for Netflix