Research has historically found American Indian/Alaskan Native and White non-Hispanic individuals to be at highest risk for suicide (Curtin & Hedegaard, 2019). In 2017 the age-adjusted rate of death by suicide per 100,000 people was significantly higher for American Indian/Alaskan Native (22.15) and White non-Hispanic individuals (17.83), compared to Black (6.85), Asian/Pacific Islander (6.75), and Hispanic (6.89) individuals (NCHS, 2017). Given differences in suicidality by race/ethnicity and the finding that LGBT youth are more than four times more likely to attempt suicide compared to peers (Kann et al., 2018; Johns et al., 2019), there is a need to examine how race/ethnicity impacts suicide risk among LGBTQ youth. Past studies on intersectional identities among LGBTQ youth have been limited due to difficulties obtaining large, diverse samples. This brief draws from The Trevor Project’s National Survey on LGBTQ Youth Mental Health (The Trevor Project, 2019) with over 25,000 respondents to examine suicide attempts by race/ethnicity and gender identities. 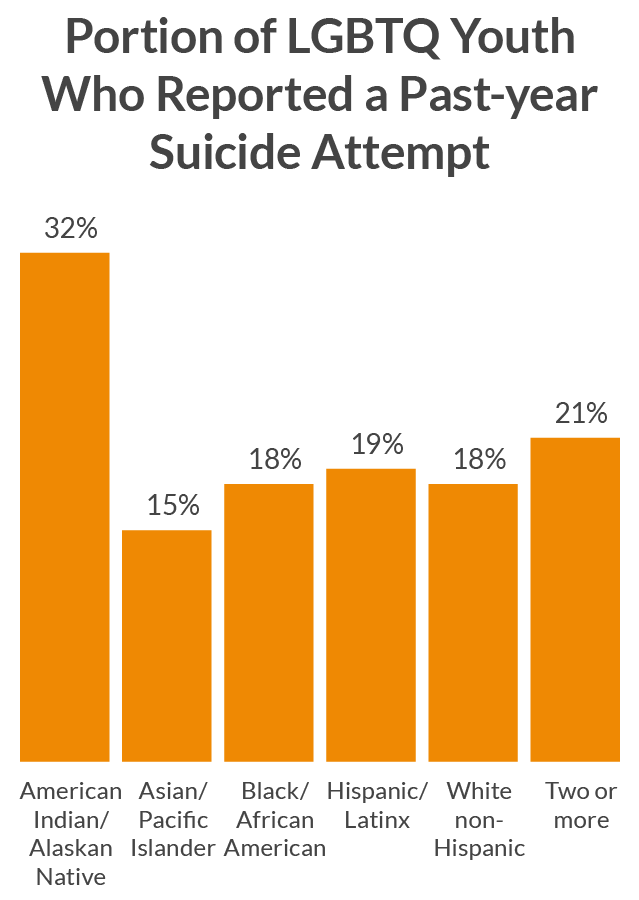 The proportion of LGBTQ youth reporting a suicide attempt in the past year was higher among youth of color (21%) than White non-Hispanic youth (18%). Rates were highest among American Indian/Alaskan Native LGBTQ youth (32%) and lowest among Asian/Pacific Islander LGBTQ youth (15%). 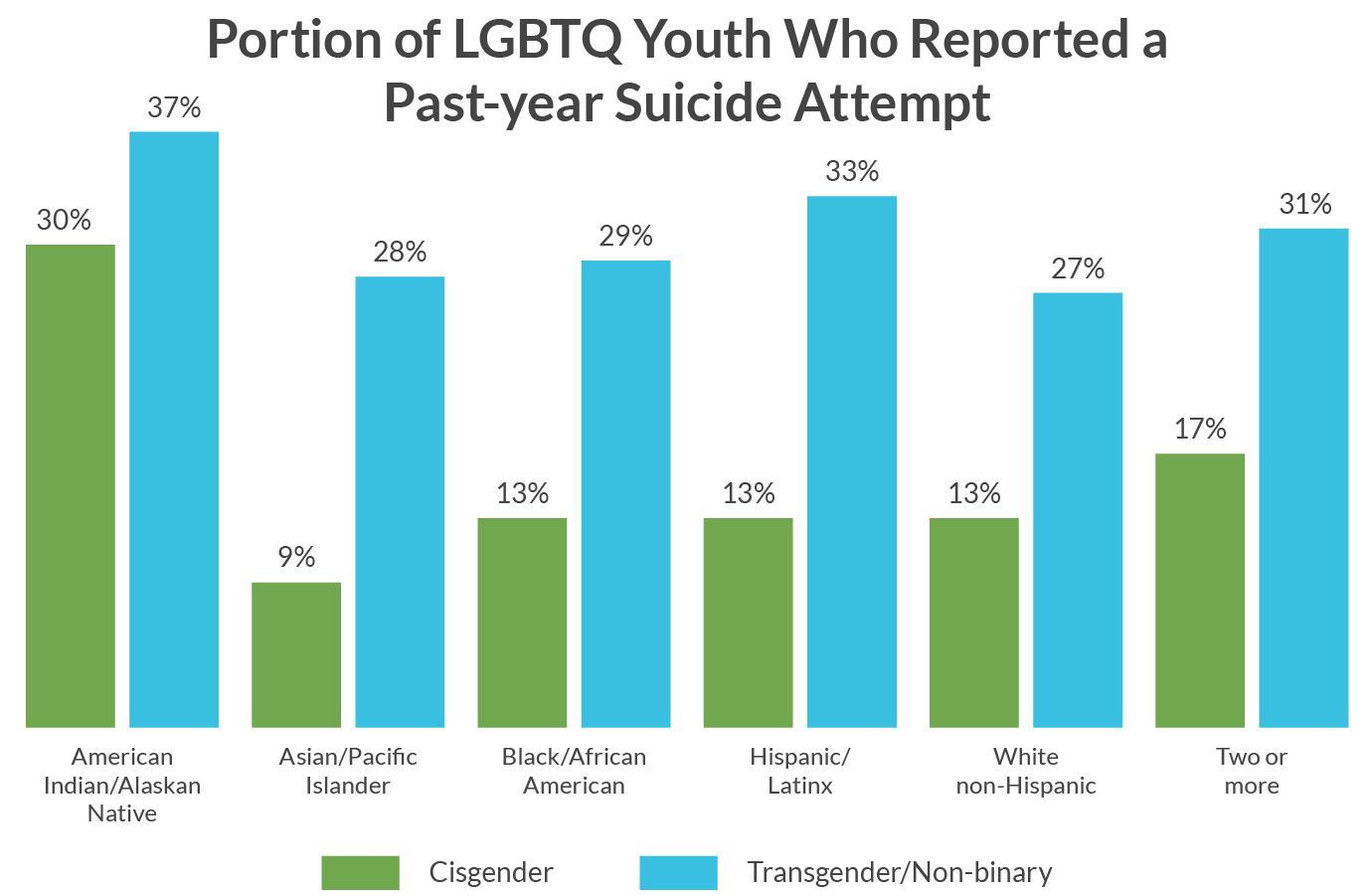 A quantitative cross-sectional design was used to collect data through an online survey platform between February and September 2018. A sample of LGBTQ youth ages 13–24 who resided in the United States were recruited via targeted ads on social media. A total of 34,808 youth consented to complete The Trevor Project’s 2019 National Survey on LGBTQ Youth Mental Health with a final analytic sample of 25,896. Over a quarter of the sample (28%) identified as a youth of color (i.e. endorsed a race/ethnicity other than White non-Hispanic). Past year suicide attempt was assessed with the question “During the past 12 months, did you actually attempt suicide?,” which was asked of youth who reported having seriously considered suicide in the past 12 months. A logistic regression model was used to examine the odds of a past year suicide attempt for American Indian/Alaskan Native, Asian/Pacific Islander, Black/African American, Hispanic/Latinx, and youth with two or more racial/ethnic identities compared to White non-Hispanic youth. This model adjusted for the associations of age, socioeconomic status, gender identity,  discrimination due to sexual orientation or gender identity, and physical threats or harm due to sexual orientation or gender identity with past year suicide attempt.

These findings highlight the continued need to address suicidality from an intersectional perspective. Researchers must work to better understand the experiences and needs of youth who hold multiple marginalized identities in order to implement culturally competent strategies in a wide range of settings including health care, education, and the workplace.

At The Trevor Project, our crisis services team works 24/7 to provide culturally-informed support to youth in crisis. We also provide trainings across the U.S. focused on understanding LGBTQ identities that are inclusive of an intersectional perspective. These trainings help counselors, educators, and other stakeholders understand the diverse and unique needs of LGBTQ youth. The Trevor Project also uses the strengths of our advocacy team to ensure that our society has inclusive policies that support the needs of all LGBTQ youth. Finally, our research team continues to collect and disseminate data on the diverse lives of LGBTQ youth so that The Trevor Project and others across the U.S. will be best prepared to save even more young LGBTQ lives.