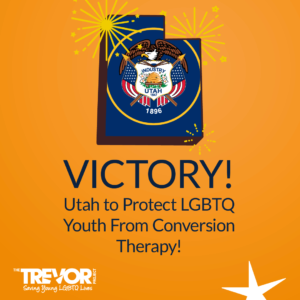 Advocates from across Utah have fought tirelessly to end the dangerous practice of conversion therapy. Tonight, that work culminated in Governor Herbert’s announcement that the state will propose an administrative rule identical to legislation introduced this year [https://www.thetrevorproject.org/trvr_press/utah-introduces-legislation-to-protect-youth-from-conversion-therapy/] to prohibit licensed professionals from practicing conversion therapy on minors. This announcement follows an extensive deliberation by the state’s Division of Occupational and Professional Licensing (DOPL). This is historic progress and further proof that the protection of LGBTQ youth transcends regional or political divides. When these protections go into effect in January, Utah will join 18 other states, the District of Columbia, and dozens of cities and counties in restricting this discredited practice.

“The Trevor Project congratulates our friends at Equality Utah and all the advocates who have worked tirelessly to protect LGBTQ youth from the dangers of conversion therapy in Utah. As a survivor of conversion therapy, I am tremendously encouraged to see Utah on the road to becoming the 19th state to protect LGBTQ youth from this discredited practice,” said Sam Brinton, Head of Advocacy and Government Affairs for The Trevor Project. “The rules put forward today by the Governor will protect thousands of young people in Utah, and galvanize momentum to protect youth across the country. Our research shows that one accepting adult in the life of an  LGBTQ young person made them significantly less likely to report a suicide attempt in the past year. Knowing that their state government has their back will literally save lives.”

The Trevor Project’s 50 Bills 50 States campaign has partnered with the Human Rights Campaign, National Center for Lesbian Rights, and Equality Utah, along with local advocates in support of these vital protections.

“Today, Utah’s Governor Herbert and the Division of Occupational and Professional Licensing have issued a new statewide rule to protect minors from conversion therapy—the dangerous, discredited practice to “cure” LGBTQ clients,” said Troy Williams, Executive Director of Equality Utah.“We are profoundly grateful to the Herbert Administration for the thoughtful and meticulous manner in which they have worked to protect LGBTQ youth.  This summer, Governor Herbert declared that science would prevail over politics, and he has kept his word. Today, Utah is a safer state for our youth to live and thrive”

As we continue to make progress across the nation, we must remember that there are still 31 states where this harmful practice has not been outlawed for minors. To do that, we need your help. Please join the effort to end this practice across the nation here: