Individuals with substance use disorders experience diminished physical and mental health (Grant et al., 2016), and most adults diagnosed with a substance use disorder began using substances as youth or young adults (SAMHSA, 2014). Further, substance use disorders are common among those who die by suicide; in fact, studies have found that those with a drug use disorder are at seven times increased risk of dying by suicide (Conner et al., 2019). National prevalence data on lesbian, gay, and bisexual (LGB) high school students indicate that LGB youth engage in substance use at significantly higher rates than straight peers (Kann et al., 2018). However, there is a lack of easily accessible nationally representative data on LGB young adults over the age of 18. A clear understanding of disparities in substance use by sexual identity among not only high school students, but also those ages 18–25, is necessary to inform national prevention strategies, advocate for policy changes, and advance research. 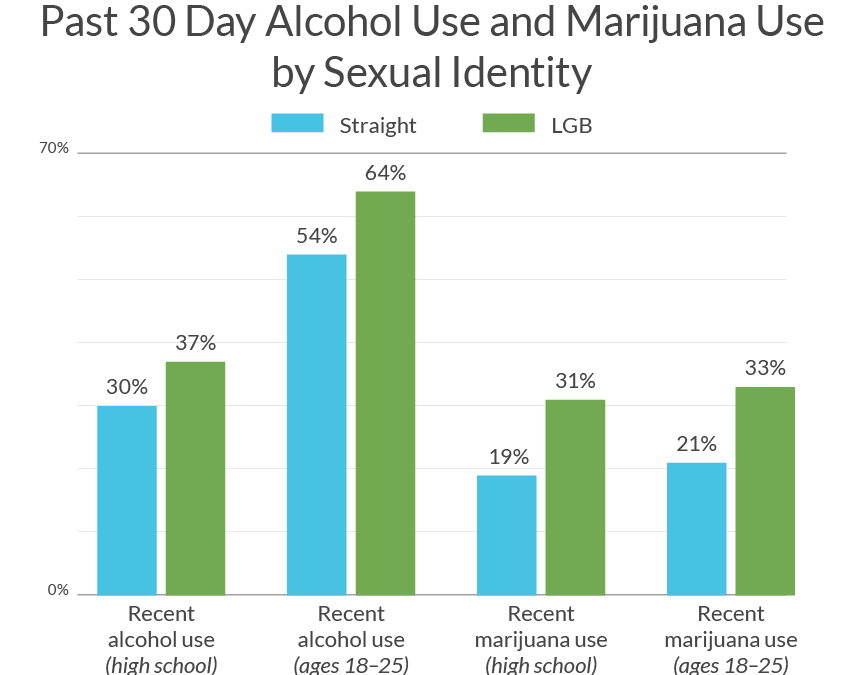 LGB high school students and young adults reported 2–3 times greater rates of ever using hard drugs including cocaine, ecstasy, methamphetamine, and heroin compared to straight peers. The greatest disparities were found among LGB high school students who had triple the rates of ecstasy, methamphetamine, and heroin use compared to straight peers.

National prevalence rates by sexual identity for past 30 day alcohol use and marijuana use and lifetime cocaine, ecstasy, methamphetamine, and heroin use are from SAMHSA’s 2018 National Survey on Drug Use and Health for ages 18–25 and CDC’s 2017 Youth Risk Behavior Surveillance Survey for high school students. Survey questions assessing past 30 day use of marijuana did not distinguish between medical and non-medical use. Complex sampling modules and sampling weights were applied in both datasets.

These findings support The Trevor Project’s focus on serving LGBTQ youth beyond high school and into young adulthood. Substance use is one of the most consistent risk factors for suicide attempts and deaths by suicide (SAMHSA, 2016). Disparities by sexual identity persist across adolescence and into young adulthood for drug and alcohol use. The most striking disparities were found among hard drugs. U.S. prevention efforts aimed at ending one of the worst ever national drug crises need to be inclusive of LGBTQ youth. Our results can serve as a catalyst for increased funding for and research on substance use prevention among LGBTQ youth. We also advocate for measuring gender identity in federal data collection efforts to better understand substance use and suicidality among all LGBTQ youth.