API youth were significantly less likely than non-API youth to share their LGBTQ identity with parents; however, they were just as likely to share with friends. API LGBTQ youth were less likely than non-API LGBTQ youth to share their sexual orientation (42% vs 68%) or gender identity (43% vs. 51%) with parents. API LGBTQ youth reported similar rates to non-API youth of sharing their sexual orientation with straight (86% vs 86%) and LGBTQ friends (89% v. 92%). API TGNB youth also reported similar rates to non-API TGNB youth for sharing their gender identity with straight (60% vs. 59%) and LGBTQ friends (87% vs. 85%). 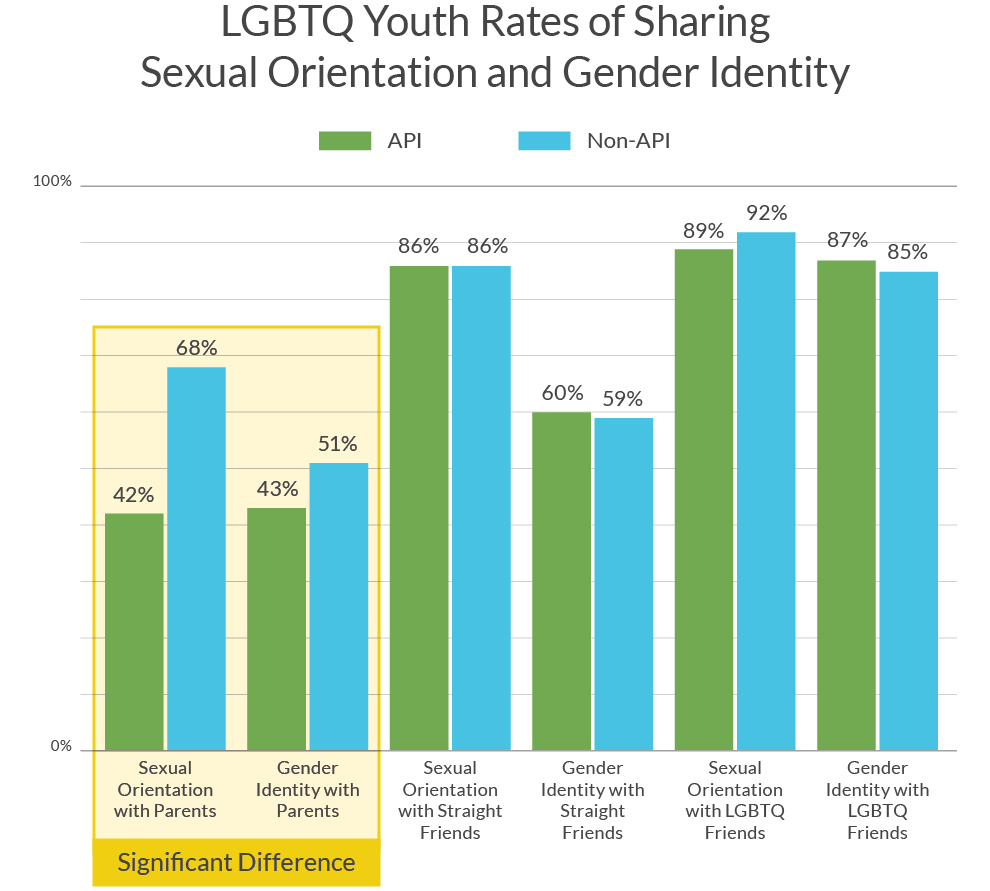 A quantitative cross-sectional design was used to collect data through an online survey between February and September 2018. LGBTQ youth ages 13–24 who resided in the U.S. were recruited via targeted ads on social media. A total of 34,808 youth consented to complete The Trevor Project’s 2019 National Survey on LGBTQ Youth Mental Health with a final analytic sample of 25,896, of which 785 identified as exclusively API (youth with family origins in East, Southeast, and Southern Asia and/or Pacific Islands.) Items indicating depressed mood, seriously considering suicide, and attempting suicide in the past 12 months were taken from the CDC’s Youth Risk Behavior Surveillance Survey. Youth were included as “sharing” if they endorsed “your parents,” “your straight friends,” or “your LGBTQ friends,” when asked “Who have you shared your sexual orientation with” or “Who have you shared your gender identity with?” Level of acceptance was rated for each category of individuals with whom they endorsed sharing. Logistic regression models were used to predict attempting suicide, adjusting for age and gender identity.

Suicide prevention initiatives should be inclusive of API LGBTQ youth and mindful of the unique findings described in this brief. Although API LGBTQ youth reported slightly lower rates of depressed mood and suicidality compared to non-API LGBTQ youth, their rates were still much higher than those of straight/cisgender youth (Green, Price-Feeney & Dorison, 2020). And API TGNB youth were at three times increased risk for attempting suicide compared to cisgender API LGBQ youth. Acceptance from parents and peers are two of the strongest protective factors for LGBTQ youth mental health (Russell & Fish, 2016). Although API youth were less likely to disclose their LGBTQ identity to parents, most API youth shared their LGBTQ identities and were accepted by friends. Coming out is an incredibly personal decision. There may be certain people with whom youth are comfortable sharing and others with whom they are not. Institutions supporting youth should note Trevor’s Coming Out Handbook, which highlights the importance of youth having the choice to disclose or not disclose their LGBTQ identity. The Trevor Project’s crisis services team supports all LGBTQ youth in their identity, including navigating disclosure, while providing high quality, culturally-grounded care. Further, our research team is committed to using data to assist Trevor and others in better understanding and addressing the needs of API LGBTQ youth.