Lesbian, gay, bisexual, transgender, queer, and questioning (LGBTQ) youth experience higher rates of mental health challenges compared to their cisgender, straight peers as a result of chronic stressors such as discrimination and victimization (Kann, et al., 2018; Johns, et al., 2019; Meyer, 2003). Pronouns, a way to streamline language, have historically emphasized a binary construction of gender in many languages, including English (Butler, 1999). While many people use a pronoun associated with their sex assigned at birth, gendered pronouns, and the assumptions behind them, may represent a daily stressor for LGBTQ youth, particularly youth who are transgender and nonbinary (TGNB). Affirming LGBTQ youth’s gender by using pronouns that align with their gender identity has been shown to improve mental health outcomes. Specifically, The Trevor Project’s 2020 National Survey on LGBTQ Youth Mental Health found that TGNB youth who reported having their pronouns respected by all or most of the people in the lives attempted suicide at half the rate of those who did not have their pronouns respected (The Trevor Project, 2020). This brief uses data from the Trevor Project’s 2020 National Survey on LGBTQ Youth Mental Health to further explore pronoun usage among LGBTQ youth.

Nearly two-thirds of LGBTQ youth who use pronouns outside of the binary opt to use combinations of he/him, she/her, and they/them. This included pronoun usage such as “she and they” or “he and they,” as well as using “she, he, and they” to express the nuances of their gender.

Some LGBTQ youth do use pronouns beyond those already familiar to most people. While 4% of LGBTQ youth reported the use of pronouns such as “ze/zir,” “xe/xim,” and “fae/faer,” or combinations of these terms with other pronouns, 96% of LBGTQ youth in our sample used pronouns that are familiar to most people by using either a combination of he/him, she/her, or they/them or one of these pronoun sets exclusively. 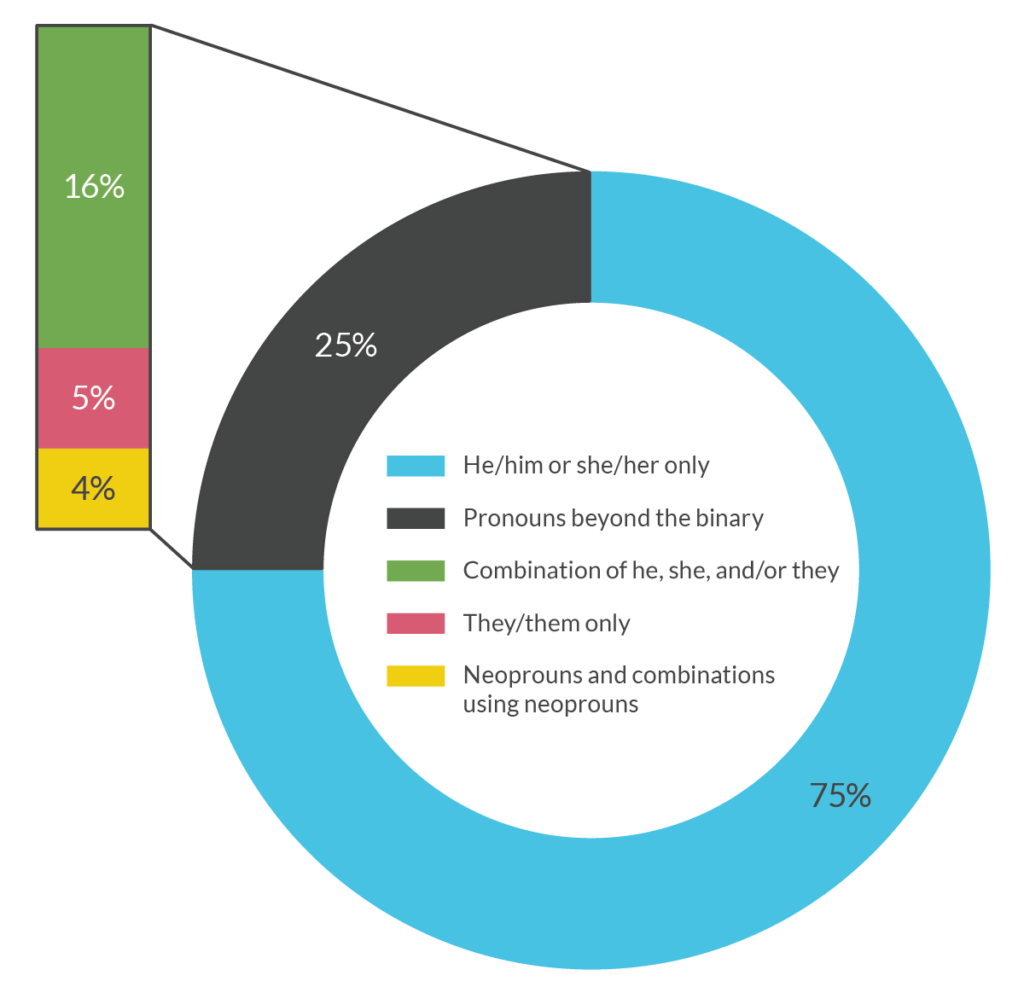 A quantitative cross-sectional online survey was used to collect data between December 2019 and March 2020. LGBTQ youth ages 13–24 who resided in the U.S. were recruited via targeted ads on social media. The final analytic sample was 40,001 LGBTQ youth. All youth were asked, “Which pronouns do you currently use? Please select all that apply.” Response options included: “she, her, hers”; “he, him, his”; “they, them, theirs”; “ze, zir, zirs”; and “something else (please specify).” Although “ze, zir, zirs” was the only set of neopronouns provided outside of the “something else” category, it was only endorsed exclusively by 1% of the total sample.

The results show that although LGBTQ youth are using pronouns in nuanced ways, the majority who use pronouns outside of the gender binary use either familiar pronouns or combinations of these familiar pronouns to express their gender. An individual’s pronoun expression, or even the decision to avoid them altogether, is a very important reflection of a person’s identity. Respecting pronouns is part of creating a supportive and accepting environment, which impacts well-being and reduces suicide risk (Durwood et al., 2017; The Trevor Project, 2020). The Trevor Project Guide to Becoming an Ally to Transgender and Nonbinary Youth suggests that the best way to confirm a person’s pronouns is by asking or by introducing yourself with your pronouns, to give the person an opportunity to share theirs. Parents, other family members, school staff, health professionals, and other individuals in youth’s lives can best support youth by asking for and consistently using their pronouns. Affirming gender in school and workplace settings can begin by having a practice of sharing pronouns for everyone and setting the expectation that all individuals will have their pronouns respected by others.

At The Trevor Project, many of the young people we serve and the staff members and volunteers of our organization use pronouns outside of the gender binary to express their gender identities. It is crucial that these pronouns be respected to support LGBTQ individuals. As part of The Trevor Project’s mission to end suicide among LGBTQ young people, we prioritize the use of correct pronouns when serving our youth, educating the broader public on ways to use pronouns to affirm an individual’s identity, and advocating for gender-affirming policies across the nation.