According to the Centers for Disease Control and Prevention’s (CDC) 2017 Youth Risk Behavior Surveillance System (YRBS), 58% of straight high school students participated in sports in the past year, compared to 38% of students who identified as gay, lesbian, or bisexual (CDC, 2020). The YRBS does not include measures of gender identity on a national level; however, The Trevor Project found that transgender and nonbinary youth (TGNB) were nearly half as likely to report sports participation compared to cisgender lesbian, gay, bisexual, queer, and questioning (LGBQ) youth (Green, Price-Feeney, Dorison, 2020). To date, there is limited research exploring the well-being of LGBTQ youth who participate in sports. Past research among the broader U.S. youth population has found sports participation to be associated with higher grades (Van Boekel et al., 2016) and reduced depression (Eime et al., 2013), but also increased alcohol use (Kwan et al., 2014). Given that sports may be one of many areas where LGBTQ youth experience exclusion and discrimination (Greenspan et al., 2019), and therefore do not have equal access to its potential benefits, there is a need for research that examines the well-being of LGBTQ youth who participate in sports, including whether benefits affording to non-LGBTQ youth are also experienced by LGBTQ youth athletes. Using data from The Trevor Project’s 2020 National Survey on LGBTQ Youth Mental Health, this brief examines the associations of symptoms of depression, substance use, and academic achievement with sports participation among LGBTQ youth. 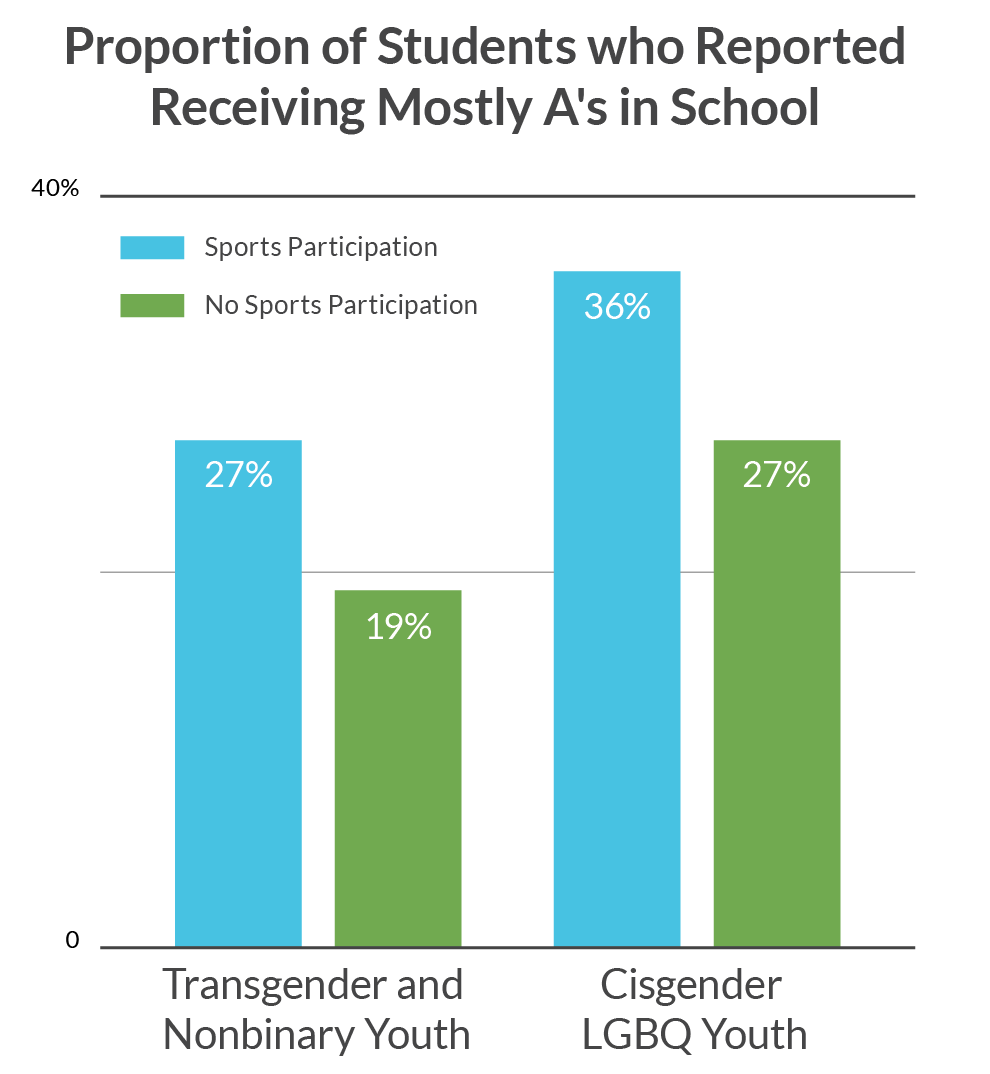 In line with findings found among the broader U.S. populations of high school students, LGBTQ youth who participated in sports reported higher rates of recent alcohol use than LGBTQ youth who did not participate in sports. LGBTQ athletes were 30% more likely to report drinking alcohol in the past 30 days compared to those who did not participate in sports (aOR=1.30, p<.001). The association between sports participation and increased alcohol use was found among both TGNB and cisgender LGBQ youth.

A quantitative cross-sectional online survey was used to collect data between December 2019 and March 2020. LGBTQ youth ages 13–24 who resided in the U.S. were recruited via targeted ads on social media. The final analytic sample consisted of 40,001 LGBTQ youth. Youth who indicated being enrolled in middle school or high school (n=17,476) were asked to select which, if any, school activities they participated in from a list of fifteen categories, including sports. Youth were also asked to describe their grades in school using categorical options of letter grades from “mostly A’s” to “mostly F’s.” Data on depressive symptoms The Patient Health Questionnaire-2 depression screening form was used to indicate depressive symptoms in the past two weeks. Recent alcohol use was assessed by asking youth whether or not they drank alcohol in the past 30 days. Adjusted logistic regression models were used to examine the influence of sports participation on depressive symptoms and substance use after adjusting for age, gender identity, sex assigned at birth, and socioeconomic status. Additionally separate adjusted regression models were run by TGNB status adjusting for age, sex assigned at birth, and socioeconomic status.

Looking Ahead
Although LGBTQ youth are less likely to participate in sports than their straight and cisgender peers (CDC, 2020; Green et al., 2020), their involvement in sports is associated with similar positive (higher grades, lower depression) and negative (greater substance use) factors. Of note, participation in sports was not associated with lower depressive symptoms for TGNB youth, indicating the need for future research to explore how sports participation may differentially impact the mental health of TGNB youth.  Despite these findings of potential benefits, access to sports participation may not be afforded to all LGBTQ youth. Past studies point to discrimination and safety concerns as potential reasons for lower sports participation among LGBTQ youth, particularly those who are TGNB. Additionally, those who do participate report high levels of anti-LGBTQ sentiments (Greenspan et al., 2019). These data highlight the need to reduce harmful barriers to participation and improve the overall climate of sports environments to be supportive and affirming places for all youth. The Trevor Project is actively engaged in research, policy, and public education initiatives to ensure that all youth have the support needed to participate in sports as their authentic selves, free from discrimination and victimization.